Secret spots in Ibiza: Lesser-known areas of the island 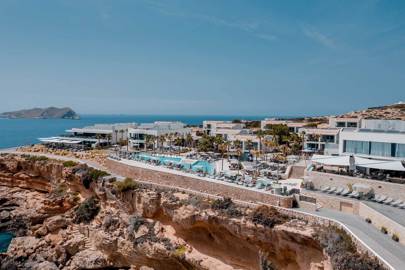 The lasting myth that Ibiza is merely for hedonists was overturned long ago, but there are other, more fabled tales still in existence. That Es Vedrà, a limestone monolith jutting off the island’s south-west coast, is the third most magnetic place on earth is one example. Mention the fact to an ibicenco and they raise a wry eyebrow in response, yet it remains deeply entrenched in local folklore. Veracity aside, it’s easy to understand how this mysterious landmark captures imaginations, particularly at dusk, when its jagged silhouette can feel almost celestial against a melting sky.

Es Vedrà has come to symbolise the antithesis of Ibiza’s party reputation, instead drawing eyes to the island’s quieter, more peaceful stretch of coastline and the swirl of magnificent beaches and beach bars that cascade around it. Inland, imposing cliffs cast shadows as the sun dances through the hours, and techno tunes are replaced by lively cicada song rising from the branches of lime-leaved pine trees. The salt-crested Mediterranean breeze floats through fragrant rosemary bushes, invigorating the senses, and days are spent in boats, languidly nipping between nooks and coves and cooling off in clear, lemonade waters. Nights are spent dining beneath the velvety, flickering sky that somehow just seems so much brighter on this side of the island.

Things to do in Marfa, Tex.

10 Best Small Towns in Maine, According to a Local