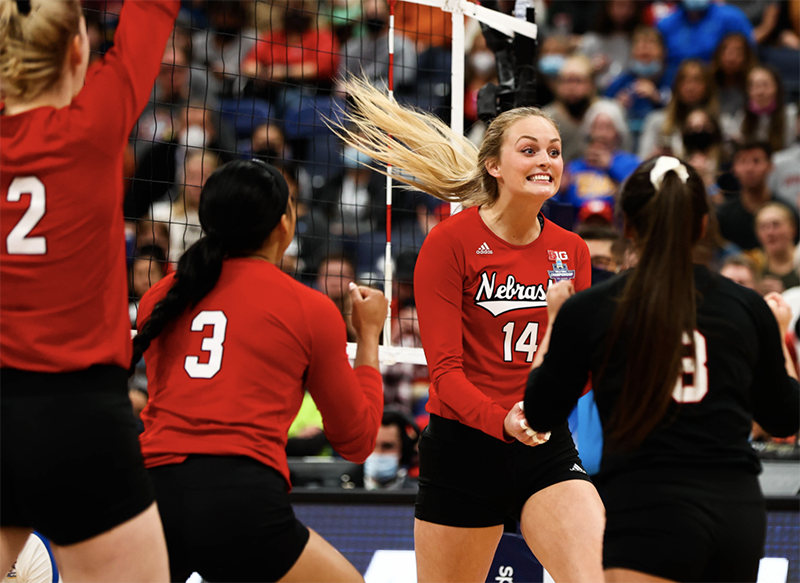 The No. 10 Nebraska Huskers are headed to the national championship, and we have an all Big Ten final on Saturday night. The Huskers will take on Wisconsin for the third time this season for the trophy. Nebraska’s historic win ended yet another historic season for an ACC team, as Pitt was eliminated. Hats off to the Panthers on a remarkable season and tournament run.

The Huskers are HOT at the right time, and it got them all the way to the national title game. This Nebraska team went through so much adversity this season, lineup changes, then some more changes, loss after loss, and now they are amongst the top two teams in the NCAA with three freshman in their rotation. Lauren Stivrins returned from injury and came back to play her very last season for this reason.

After a slow first set for Nebraska, they turned on the jets to win the next three and advance in four sets. The Huskers name of the game tonight was blocking, defense and serving. They hit just .246 on the match, but this is pretty typical for Nebraska this season…. they get it done in other ways. The Huskers put up 10 blocks and six service aces, and applied pressure on the Panthers all night long from the service line. In doing so, they slowed down Pitt’s speedy offense and controlled Leketor Member-Meneh’s game a bit.

Madi Kubik led with 13 kills on .226 hitting and 13 digs, followed by Kayla Caffey, who added 10 kills and four blocks. Lindsay Krause ended up having a great night with nine kills at a .368 clip and then Stivrins, the heart of this team, posted nine on .529 hitting and six blocks. She was so impressive and came alive late in the match to ensure her team was moving on.

Nebraska controlled most of the fourth set, but Pitt was able to tie it up at 20. The Panthers were within one when Stivrins went off with two back-to-back kills to give Nebraska match point. Then, we had another match that ended fittingly, as Stivrins picked up the game-winning block.

Member-Meneh and Serena Gray led the Panthers with 13 and 11 kills, respectively.

LET’S PLAY FOR A NATTY pic.twitter.com/y4v5FLkLLA

Two growth stocks to sit on for retirement