New open-air theatres in the UK 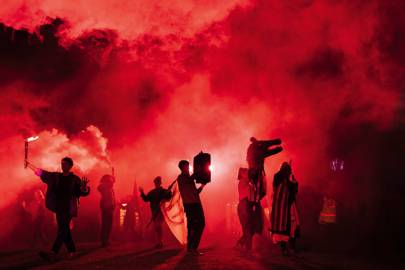 The past 15 months could have been scripted by a Greek tragedian: a world cast into turmoil by plague. Yet there are epilogues of optimism. Following a shift that has seen a populace spirited to the great outdoors, the curtain will rise this summer on a new wave of open-air performance spaces, from bosky hideaways to cutting-edge urban stages. Thorington Theatre, housed in an old bomb crater due to its location near a former US air base, is hidden within Suffolk forest. Built using sustainably sourced timber, it opens in June, when around 350 spectators will be treated to productions of Twelfth Night and The Secret Garden, quenching half-time thirst with local tipples of Giffords Hall sparkling wine and Aspall Cyder. It is very much a community offering, involving children’s drama groups such as Minnie Mouth Theatre and Inside Out. This civic approach also forms the backbone of The Sanctuary, a new earthen amphitheatre set outside a long barrow close to Soulton Hall in Shropshire. The two-tiered knoll seats 150 and will stage plays including the National Youth Theatre’s Animal Farm. Yet these spectacles come with a modest disclaimer: ‘Bring fortitude and dress for the weather,’ says Toby Angel, co-founder of Sacred Stones, who designed and crafted the barrow. And it isn’t just happening in rural settings. Arcola Outside from Arcola Theatre in London’s Hackney is slated to open later this year next to the current space, with shipping containers housing a bar and the entertainment, which will include comedy and musicals. Perhaps one of the more meaningful gestures of outdoor performance taking place this summer is The Walk, produced by Stephen Daldry and the Good Chance theatre. It will see Little Amal, an 11ft puppet, traverse 5,000 miles with the help of nine puppeteers through more than 65 villages from Turkey to the UK, arriving on our shores on 19 October. The start of her journey at the Turkish-Syrian border will be celebrated at Manchester’s MIF21 Festival in July. Given that travelling theatre is one of the most democratic art forms, anyone can join the character’s pilgrimage as she weaves across Europe, with the aim to raise awareness of the plight of refugees. ‘Little Amal’s story transcends borders and language,’ says Daldry. But she is also a figure of great hope. In times such as these we need art more than ever.’

When theatres will open again in the UK

When theatres will open again in the UK

The best open-air theatres in London

The best open-air theatres in London and the UK

The best drive-in cinemas in the UK

The best drive-in cinemas in the UK

What will be the deciding factors Saturday night?