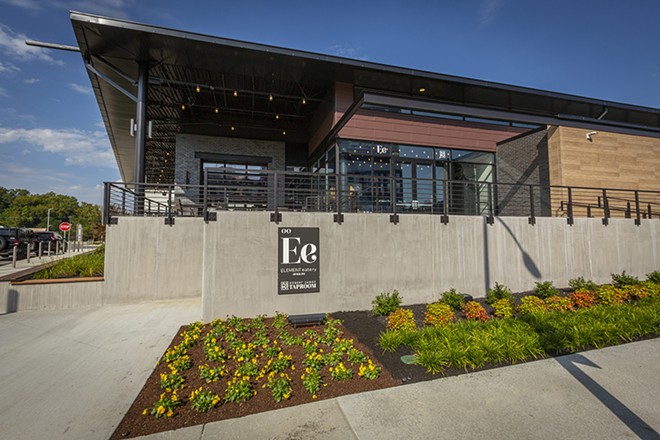 Is there any better way to celebrate the opening of a food hall than with some 1990s alt rock?

Madisonville’s Element Eatery would say no, as the 34,500-square-foot space gets ready to host its grand opening on Sept. 24 with a concert from The Verve Pipe.

Yes, that Verve Pipe — whose single “The Freshman” hit No. 5 on the Billboard Hot 100 in 1997. Is it weird? Kind of. Will the following lyrics been repeating in your head as you indulge in food or drink from one of the food hall’s vendors? Probably.

“When I was young I knew everything
And she a punk who rarely ever took advice
Now i’m guilt stricken, sobbing with my head on the floor
Stop a baby’s breath and a shoe full of rice.”

The multi-platinum band is slated to take the stage at 7 p.m. Sept. 24. The show is free. And Element will be celebrating its opening again on Sept. 25 by screening the Bengals game on 53 TVs and hosting another free concert, this time featuring progressive rockers Chirp at 5 p.m.

“We’re really looking forward to welcoming everyone to the Element Eatery grand opening this weekend. We’re proud of the incredible mix food, drink and entertainment we’ve brought together, and we are ready to open our doors,” says Tyler Troendle, managing director of AT Hospitality LLC , developer of the food hall, in a release.

There are currently 10 vendors at Element:

In addition to the drinking and dining options, Element offers seating for 400 inside and more than 200 people on three different outdoor terraces. A release says people can expect more entertainment and events here in the future. The space will also act as an anchor in the developing Madison Square area around the Medpace campus, which includes high-end restaurant Alara and bar Placebo.

Send CityBeat a news or story tip or submit a calendar event.

For Moshe Safdie, Thoughtful Architecture Is About Humility

See Fall Foliage on a Road Trip Through Eastern Iowa