Japan recorded more than 76,000 new coronavirus cases on Tuesday, more than double from a week earlier and topping the 70,000 mark for the first time since March 3 amid signs the nation is undergoing a seventh wave of infections.

Record one-day infections were logged in 12 prefectures including the southwestern prefecture of Okinawa, which saw 3,436 infections and four more deaths.

In response to the surging cases, the government now plans to postpone the launch of a nationwide travel subsidy program for Japan residents that it had envisioned for the first half of July. 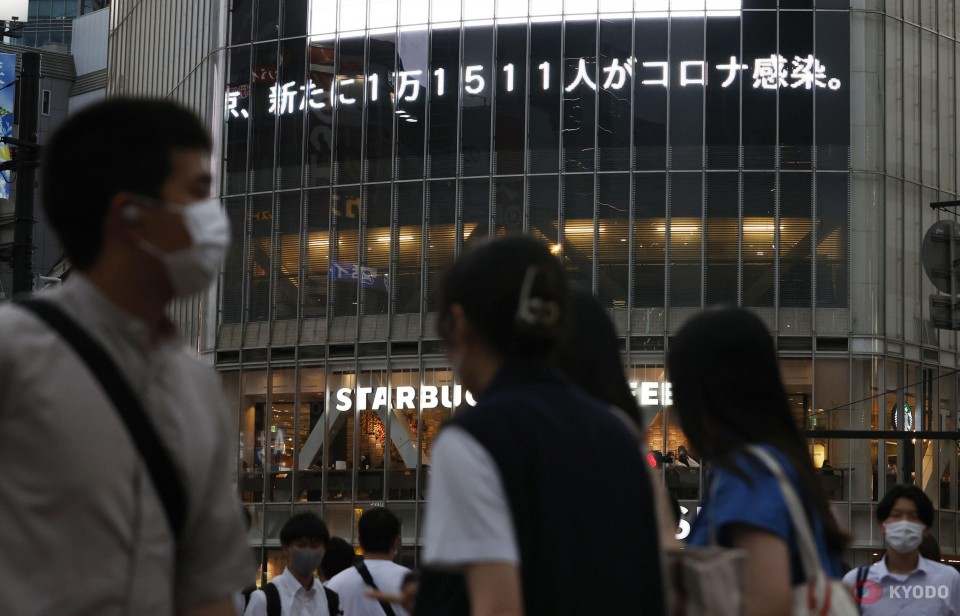 People wearing face masks walk in Tokyo’s Shibuya area on July 12, 2022, against the backdrop of an electric board showing news that the Japanese capital reported 11,511 new coronavirus infections. (Kyodo)

The new subsidy campaign is expected to be an expanded version of a similar program currently implemented at the prefectural level to encourage local travel among residents. The government will continue its financial support for the area-limited subsidies through the end of August.

Despite the postponement, government officials have ruled out restrictions on people’s movements. At a news conference, health minister Shigeyuki Goto expressed concern about a further increase in infections during the upcoming summer vacation period, but said, “We don’t think the current situation requires movement controls.”

The coronavirus response headquarters of the National Governors’ Association compiled a set of recommendations to the government on Tuesday, including expanded free lab tests and financial support to the tourism industry.

Tokyo’s results on Tuesday mirrored the national picture, with the metropolitan government reporting 11,511 new coronavirus infections, over double the level a week earlier. The figures took the capital past 10,000 for the first time since March 16.

Its seven-day rolling average of new cases was 8,941 per day, up 136.6 percent on the previous week. One death was also confirmed.

The new figures come after Shigeru Omi, the head of a government COVID-19 experts panel, said Monday that Japan “has no doubt entered” a seventh wave of coronavirus infections. The surge is likely being fueled by the BA.5 subvariant of the Omicron variant, which is said to be highly transmissible.

Mystic Seaport Musuem back in full swing for summer

Mystic Seaport Musuem back in full swing for summer