Get the latest Syracuse news delivered right to your inbox.
Subscribe to our sports newsletter here.

The week-long camp hosted 13 NCAA players from various schools to compete in a matchup against Puerto Rico’s All-Star volleyball team. Players had to be within two generations of Puerto Rican descent to be eligible for the camp.

Morales decided to get in touch with Syracuse University senior middle blocker Abby Casiano during his search because he thought her last name was Puerto Rican. He reached out to University of Miami volleyball head coach Jose Gandara, also of Puerto Rican descent, who referred him to SU’s head volleyball manager Steven Soriano — a student with Puerto Rican roots.

Soriano helped Morales contact Casiano — whose father is from Puerto Rico, making her eligible to participate in the camp. SU’s volleyball coaching staff, Casiano and Morales agreed after several conversations that Casiano would travel to Puerto Rico in July and attend the camp.

In the airport on the Orange’s way to an away game, Soriano realized that SU middle blocker Izzy Plummer was Puerto Rican, too. Syracuse and the camp made arrangements for her to join the camp with Casiano. Casiano hadn’t been to Puerto Rico since she was young, and Plummer had never been.

Puerto Rican teams play a faster paced game, Casiano said, because Puerto Ricans typically have a short stature — the average height of the players on the Puerto Rico national team is slightly taller than 5 feet, 11 inches. Players over 6 feet — like 6-foot-2 Casiano and 6-foot-3 Plummer — aren’t common in Puerto Rico.

“Puerto Rico as a culture, we’re not that tall,” Morales said. “Having two tall players in the middle is something we need.” 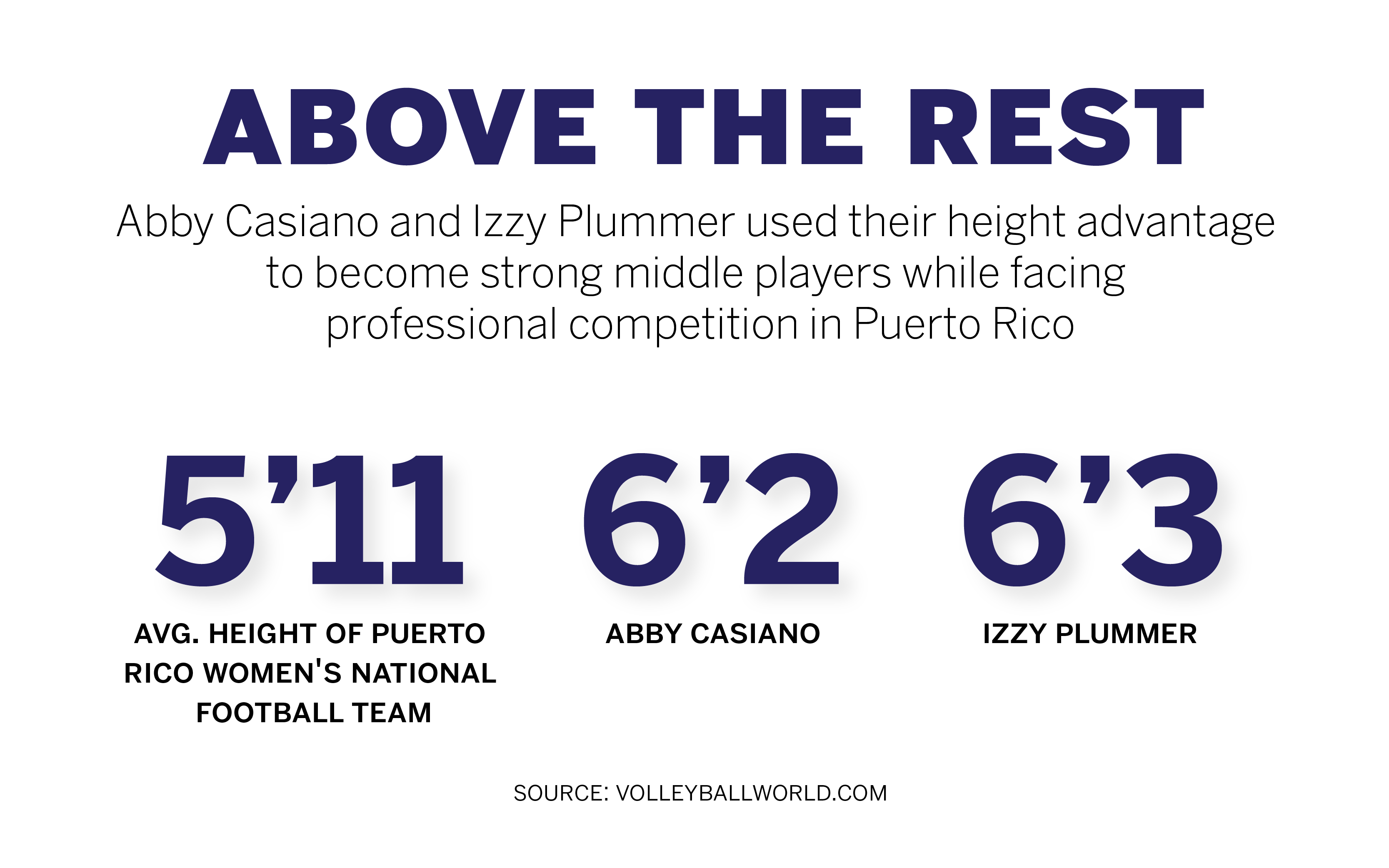 In an effort to adjust to the faster style of play and different rules, Casiano and Plummer would stay after practice to take extra reps and get accustomed to Puerto Rican rules, which Casiano said would be helpful down the road since some other ACC opponents are adopting with the same style of play that Puerto Rican teams use as well.

The group of NCAA players played for the temporary team “Boricuas NCAA,” which featured three other Atlantic Coast Conference players playing alongside Casiano and Plummer — a setter from Wake Forest, a former libero from Notre Dame and an outside hitter from Pittsburg.

Most Boricuas players knew each other strictly from collegiate competition, but they were able to bond throughout the week of camp leading up to their exhibition matchup in Gurabo against an all-star selection of players from Liga de Voleibol Superior Femenino of the Puerto Rico Women’s Professional Volleyball League. Casiano said, now that she’s familiar with players on other ACC teams, there would be a “friendly rivalry” within the ACC.

Morales said Boricuas was nervous in the opening set against the All-Stars because the players were going up against professionals. There was also a crowd of one thousand fans in attendance, which was the first time since the pandemic began that most of the players on Boricuas played in front of a crowd.

Puerto Rico as a culture, we’re not that tall. Having two tall players in the middle is something we need.

Plummer and Casiano both were active as middle blockers throughout the game, although they didn’t see much action off of sets because of Puerto Rico’s style of play. Boricuas narrowly lost the first two sets by a few points, but the team would ultimately fall to the Liga de Voleibol Superior Femenino in the third set.

“We could have won one set if it wasn’t for the slow start,” Morales said. “But I think we kept up with them all game long.”

Even though the camp was only one week, Casiano and Plummer sharpened their skills and adjusted to a quicker style of play at the development camp, preparing for the 2021 season at SU. Morales said that both Casiano and Plummer showed that they have enough skill to pursue a professional volleyball career or even play for the national team in Puerto Rico.

“I’ve already been invited back there to play with them in a tournament,” Casiano said. “I’ll definitely be back there playing against all kinds of countries.”

Japan: An Accessible Destination for All