“Manners are a sensitive awareness of the feelings of others,” Emily Post, doyenne of manners and etiquette said. “If you have that awareness, you have good manners, no matter what fork you use.”

Manners and etiquette are also the oil that keeps the engine of social behavior operating smoothly.

“Best Society is not a fellowship of the wealthy, nor does it seek to exclude those who are not of exalted birth; but it is an association of gentle-folk, of which good form in speech, charm of manner, knowledge of the social amenities, and instinctive consideration for the feelings of others, are the credentials by which society the world over recognizes its chosen members.”

In the English-speaking world, Great Britain seems to be leading the charge in preserving Old School manners and etiquette. The Oxford English Dictionary describes etiquette as “The customary code of polite behaviour in society or among members of a particular profession or group.”

Variations in manners and etiquette are endless, depending on the geography — from nations, religions and often even from one city block to the next.

Diplomats and business personnel who have to deal with foreign cultures are routinely taught about the manners and etiquette of their assigned stations. Understanding those differences is good for business and is the front line in avoiding conflict.

Even the U.S., military academies teach it — and so should parents.

In Japan, never leave your chopsticks sticking out of your rice bowl — that’s a funeral rite. Leave chopsticks across your plate or leaning on the little hashioki stand made for them.

The Canadians aren’t much for rank and privilege, but are admirably deferential and sensitive to the elderly and handicapped. Socially, if they invite you to dinner at 7 p.m. — be there at 7 p.m. In restaurants, stingy tippers are noticed.

Conversations about sex and abortion should be avoided, and beware — Canadians have strong opinions about Americans.

In Mexico, standing with hands on hips or in pockets sends a negative massage, and it’s considered poor form to compare the U.S. and Mexico. Men are culturally macho and women culturally wear makeup. If a Mexican offers you a drink — accept it graciously. And they appreciate it if you speak any Spanish — even if you know only six words.

Manners and etiquette vary across the U.S., making it difficult to define exactly what identifiable American manners and culture is — or should be.

But it’s important enough that they teach it at the U.S. military academies — and parents need to teach it to their kids.

“We are all born rude,” says Judith Martin — better known as Miss Manners. “No infant has ever appeared yet with the grace to understand how inconsiderate it is to disturb others in the middle of the night…”

On a more serious note, an unknown author wrote, “The children now love luxury; they have bad manners, contempt for authority; they show disrespect for elders and love chatter in place of exercise.

“Children are now tyrants, not the servants of their households. They no longer rise when elders enter the room. They contradict their parents, chatter before company, gobble up dainties at the table, cross their legs and tyrannize their teachers.

It’s a good idea to train our kids early.

Unsurprisingly, culture in the West is not like in the rest of America. And within those western states, there’s a myriad of competing cultures.

Idaho is not San Francisco, and Palm Springs isn’t Portland.

“Those who treat us (and others) with respect and kindness, are usually those we want to spend more time with,” advises Kenny Moore of Hayden Lake. “They are people we enjoy being around, and because we like to be in their presence, we grow to trust them.”

“We need to treat others the way we want to be treated.” — the Golden Rule.

Southern culture has a rich historical tradition that in many ways is much the same as it was 100 or 150 years ago — putting the slavery issue aside.

New Yorker City has a culture of its own too — quite different from N.Y. upstaters. The New York Post reported an online survey of 2,000 adults that Americans are generally friendly, but in New England folks are polite but more reserved, according to travel advisers Lonely Planet.

“Do not expect strangers to greet you or strike up a conversation, especially in urban areas,” Lonely Planet says. “Haggling over price is rare…Don’t assume you can smoke, even if you’re outside…(and) has even been banned from many parks and beaches.”

How about manners and etiquette in New York City?

According to Britannica, New York has more Jews than Tel Aviv, more Irish than Dublin, more Italians than Naples, and more Puerto Ricans than San Juan.

That’s a lot of mixed cultures — and there are plenty of others — so there are a lot of “do’s-and-don’ts.”

Manhattan alone has 1.63 million people jammed into just 22 square miles. That’s more than 70,000 per square mile — so manners and etiquette are especially important.

But don’t expect a laid-back Idaho-style culture in the Big Apple. The best four-letter word to describe New York is “fast.” New Yorkers know that it’s safer to keep to the right and let speedsters zip by on the left.

One Noo Yawka said, “Even if you have nowhere to be, you’re still in a rush to get there, (and) you hate bikers when you’re walking; cars when you’re biking, and pedestrians when you’re driving.”

So, what’s the culture of Idaho?

Author and publisher Larry Telles of Coeur d’Alene — a “transplant from California” — said, “I was looking for a slower life style …I found it here in Northern Idaho.

“Even the children are very polite — something I wasn’t accustomed to.”

Nice to hear that — especially after seeing a survey by Best Life Magazine that ranked Idaho as the 10th “Rudest State” in America — right behind California.

The Idaho Panhandle must have been excluded from the study.

One travel advisory says that North Idaho is known for its “stubborn individualists,” and where “the concept of personal liberties is taken very seriously,” noting that “most Idahoans are very friendly and fairly conservative.”

Do etiquette schools still exist in 2021?

Yes — but apparently not in Idaho.

Etiquette training has a long history:

During the Age of Enlightenment in the 18th century, a focus on good, proper and modernized behavior began.

In the royal courts, proper manners and etiquette were a way of life. Violations could result in dire consequences.

In Roman Empire times, it was even worse — often deadly.

Eating with good table manners is a way to show respect and appreciation for all the hard work that went into making the meal — from the farmer, rancher or fisherman who patiently brought life to the plant or animal, the distributors who brought it to the marketplace, the chef who painstakingly prepared it, and the server who brought the finished meal to your table.

Over time, those symbols of culture change, and in today’s world those changes have ballooned due in great measure to modern technology and communications.

Now in our warp-speed world, we face culture. To survive them without undue discord and violence, America must return to its traditional cultural roots.

Other fire-brand issues might include the changing fabric of both the Democrat Party and GOP, the divide between Donald Trump and Joe Biden, election fraud, COVID, Afghanistan, China, world finances, inflation, high tech tyranny, gender confusion, Black Power, LGBTQ, Hollywood and others.

Hunter’s book, “Culture Wars: The Struggle to Define America,” claims that never since the Civil War has America faced so much hostility “over basic assumptions about truth, freedom, and our national identity.”

Whether its casual Idaho, raucous Manhattan or staid and charming Charleston, S.C., good manners and proper etiquette will go a long way in curbing discord and violence — and defining who Americans truly are.

If others are not as civil as you would like them to be, be more civil — not less. That way, at least you are not moving toward open conflict and name-calling.

Eat slowly, with small bites — a meal isn’t for gorging or sprinting.

To avoid hurting someone — no flapping of elbows at the table.

Sip — gulping and slurping is sinful.

Leaving food marks on your drinking glass is yucky.

Slathering food with catsup or gravy might make the cook feel bad.

Words to live by…

The general rule in Britain is “Don’t touch the Queen,” but it happens. In 2009, Michelle Obama put her arm around Queen Elizabeth’s shoulder. That’s a no-no. Breaking her own protocol, Her Majesty then returned the favor. The sky didn’t fall and no war ensued. Another breach is being eager to shake hands with the Queen. Only shake her hand if she offers it. Also — no selfies.

History Corner invites readers who believe that culture, manners and etiquette are important to share their thoughts by sending letters to the editor — Mike Patrick at mpatrick@cdapress.com. 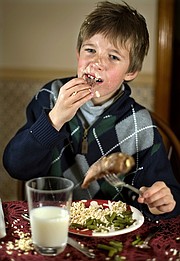 EU travel restrictions: Everything US travelers need to know

EU travel restrictions: Everything US travelers need to know

Things to do in Marfa, Tex.

10 Best Small Towns in Maine, According to a Local