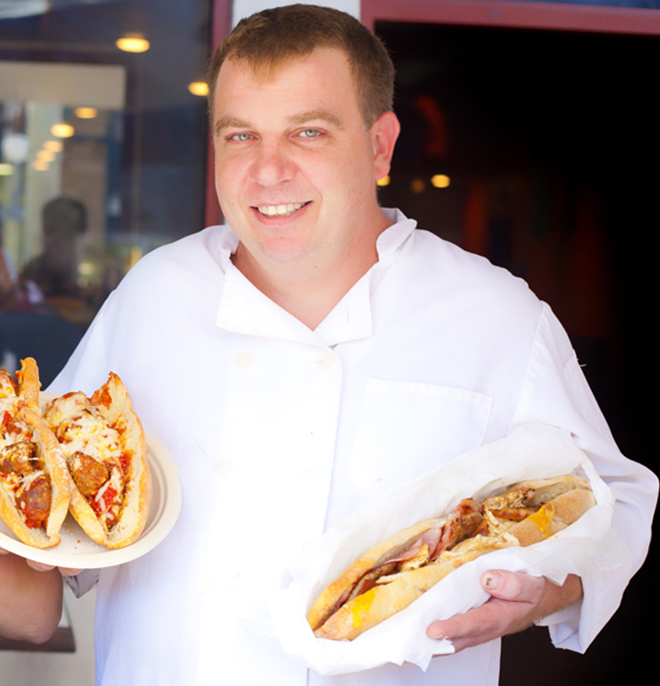 For hours on Thursday, July 28—Sunday’s Delicatessen’s second to last day open—the line sprawled out of the door and onto the Ybor City sidewalk.

The breakfast rush turned into the lunch rush as loyal customers patiently waited for one last Sunday’s sandwich. Dave and Gina Sunday, and the rest of their skeleton crew, locked the doors before 2 p.m., telling customers they had run out of food.

In its 11th year of operation, Sunday’s Delicatessen took to social media earlier this week to announce the imminent closure of the popular Ybor City eatery.

Sunday and his wife Gina, who could be typically found working the register, came back from vacation on June 19, and realized that their endless days at the deli were exhausting them.

“About a month ago we went on a cruise and took our first vacation in seven years. We just looked at each other and said “what the hell are we doing?,” 50-something year-old Sunday tells Creative Loafing Tampa Bay.

As soon as he got back from vacation, he called a local business broker to get an estimate on the business, and put out feelers shortly after that. The sale of the business is currently in its final stages, as the entire process only took a little over a month.

“We’re done. It was a really good ride. It’s not like we’re hanging our heads or anything,” Sunday says. “That’s how this whole thing works—you run the business and then you sell the business.”

Despite not being able to reveal any details of the sale, we can soon expect a new concept to open out of the space at 1930 E 7th Ave., located in between 7th + Grove and Chill Bros Scoop Shop.

The new owners also purchased all of the equipment inside of the deli, so it’s safe to assume that another food-focused business will open out of the deli’s previous space, although Sunday says that he doesn’t think it’ll be another sandwich spot.

COVID-19 and its ramifications on the restaurant industry as a whole have completely changed Dave and Gina’s relationship to their deli. Although they’ve adjusted their prices, hired employees that didn’t stick around, and recently started closing on Sundays to the dismay of customers, he says they could never really catch up.

Gina and Dave Sunday are simply burnt out.

In 2012 upon Sunday’s Delicatessen’s grand opening, he told CL that “I knew a deli was just what this town needed.” In 2022, the same man—visibly weathered from the day-long rush— tells CL that “I don’t think I’ll ever eat another sandwich again—I’m just so done.”

“I don’t think I’ll ever eat another sandwich again—I’m just so done.”

He says the first eight years of Sunday’s Delicatessen flew by, but the last two have felt like a decade.


“We haven’t had any staff in two years; we used to have eight people behind the line and now we have one,” Sunday states. “Like, I started to get angry at my friggin’ customers, like “Why are these people coming in here?” And I don’t wanna be like that, that’s no way to run a business.”

In addition to staffing issues, Sunday states that the inflated food costs and increases in rent have made it hard to turn profits. “The price of food is so friggin’ high right now. Last year, a case of chicken cost $55 and now it’s like $160. A case of eggs used to be $38, and now they’re upwards of $120.”

“Rent has gone up, property insurance has increased—everything is more expensive. There just wasn’t enough at the end of the day to make it worth it,” Sunday added.

He isn’t exactly sure what lies next for him and his wife, but the only thing on their minds is travel and relaxation. They’re in the process of purchasing a motorhome or trailer and will spend the next few months driving around the country. The only planned destination is to visit their families in New Jersey and New York, and the rest will be determined while they’re on the road.

Before opening Sunday’s Delicatessen in 2012, he ran Sunday’s Fine Dining for a few years, and has been in the food industry for almost four decades. He’s seen Ybor City change before his very eyes, and cites Orpheum’s recent relocation as one of historic district’s major losses. Although he agrees that the overall culture of Ybor City is shifting, he says that one of the coolest things about running the deli was being able to see regular customers grow over the years.

“There used to be a big table in the corner over there, and these people used to come in here when they were kids, and now they have kids of their own.  It makes me feel old,” Dave says with a laugh.

And although he’s mentally and physically burnt out from the food industry, he doesn’t want to completely shut it out forever.

“I have no idea what we’ll do. After traveling and relaxing for a few months, we might end up finding another spot that we really like,” Sunday says. “But we aren’t going to make any decisions now.”

“After this deal is officially done, I think I’m going to sleep for three days straight.”

Sunday’s Delicatessen’s last day in operation was Friday, July 29, as lines continued to bleed out of the door until the very last sandwich was sold.

10 Accessible Beaches Across the US and Canada

10 Accessible Beaches Across the US and Canada