Sandals knows how to give a party!

Its grand opening party in late June, the cornerstone of the weekend celebration marking the debut of the Sandals Royal Curacao in the Dutch Caribbean, exemplified the new resort’s tag line, “Where Amazing Comes Together” with the vibrant colors and culture of the destination.

“Curacao’s rich history and vibrant culture is something to be discovered, and we can’t wait to share Sandals Royal Curacao with the world,” said Adam Stewart, executive chairman of Sandals Resorts International.

The resort is the latest of the chain’s 16 beachfront resorts spread across Jamaica, Antigua, St. Lucia, the Bahamas, Barbados, Grenada and now Curacao. The official ribbon-cutting ceremony for the Sandals Royal Curacao took place June 3. I visited the resort in late June.

“This extraordinary new resort sends a signal about the reimagined return of Caribbean travel and the ingenuity our guests can come to expect from Sandals Resorts,” he said.

Curacao talent formed the tapestry of the high-energy opening celebration that began with the sounds of the kachu horn marking the countdown to sunset, accompanied by the fire-wielding performers of the Phoenix Theatrical Curacao troupe. 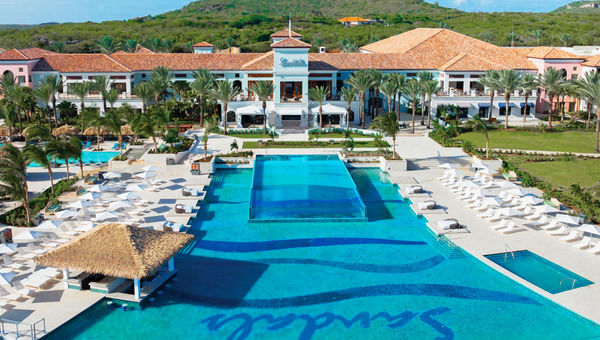 The Dos Awa bilevel infinity-edge pool is the centerpiece of the resort. Photo Credit: Courtesy of Sandals Resorts International

The island’s synchronized swim team executed a theatrical splash in the bilevel Dos Awa infinity-edge pool, the resort’s centerpiece, and Carnival-style celebrations made a grand return to Curacao for the first time since 2019 with a colorful costume parade of 100 drummers, dancers, stilt walkers and a brass band as well as three graceful aerialists swaying 20 feet above the guests, who included Gov. Lucille George-Wout and Curacao prime minister Gilmar Pisas.

Mash-ups between local steel pan drummers, DJs, violinists and the Blue Man Group headlined the evening’s musical entertainment on a large stage built above the pool, overlooking dozens of food stations and several bars, including the signature bar that represented the island’s local divi tree.

A fireworks extravaganza lit up the night sky, followed by a beachside after-party with decadent desserts and disco performances on the sand.

In an address to the international media, Stewart reiterated that he was “so proud to have Curacao in our portfolio. We made sure to acquire the best hotel in the country, and we ‘Sandalized’ it to the highest level.”

Sandals Royal Curacao, the former Santa Barbara Beach and Golf Resort, had originally opened as the Hyatt Regency Curacao in 2010. During the pandemic the Santa Barbara’s owners suspended all operations at the property. 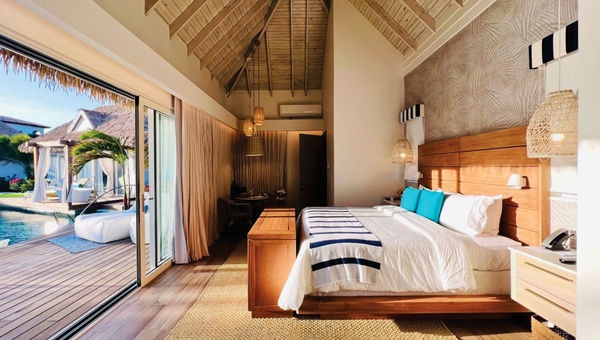 The 44-acre resort sits on 3,000 acres in the Santa Barbara Estate at the base of Tafelberg Mountain between the Caribbean and Spanish Water Bay, a natural lagoon with a long stretch of beach where Sandals now has lounge chairs, the Strand restaurant and bar and its Aqua watersports center.

Amenities include the Red Lane Spa, bicycles, wedding venues and an Island Routes tour desk with a variety of off-site programs. The Old Quarry, an 18-hole, Pete Dye-designed golf course, is located on the property, and greens fees are waived for Sandals guests.

Perks for top-tier suites include butler services and access to a fleet of Mini Cooper convertibles to explore the island.

A first for Sandals

Guests are able to experience local flavors at various partner restaurants in Curacao as part of the new Island Inclusive Dining Program, which is a first for Sandals.

“The meals are on us,” Stewart said. “We want our guests to see this destination. There is something magical here.” 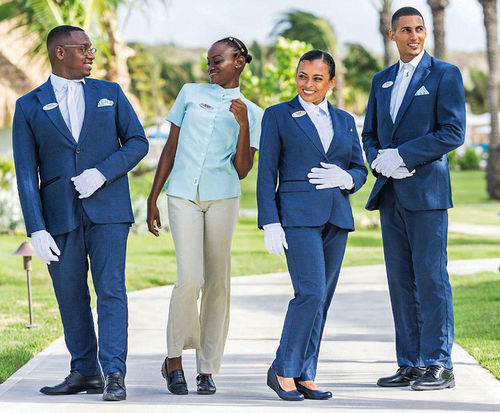 Another first for Sandals is the introduction of a line of new uniforms by designer Stan Herman. “This is clothing, not uniforms, which will be rolled out across all our resorts in various colors that reflect each island,” Stewart said. The line debuted in a seaside catwalk fashion show with employees as models.

Stewart declared that “the next five years for Sandals in the Caribbean are going to be insane. To say we are excited about our future is an understatement; we’re going to take this brand to the moon.”

He reiterated the company’s plans to develop the family-branded Beaches in St. Vincent and renovate the Sandals Negril, Beaches Negril, Sandals Dunn’s River, Sandals Royal Plantation in Jamaica and the Sandals Halcyon and La Toc in St. Lucia.

Flights taking off for the island

Travelers with Curacao vacation plans will be happy to learn that American recently added a second daily flight from Miami.

Conversations with Delta for service from Miami are ongoing, according to Alex Marte, vice president of airline relationships and sales development at Unique Vacations, Sandals’ marketing agency.

Why You Should Hire a Guide for Your Next Family Trip — Yes, Seriously

Taryn Barker is set to compete at World Butcher Challenge

Taryn Barker is set to compete at World Butcher Challenge