WSU earned win against California while losing against Stanford 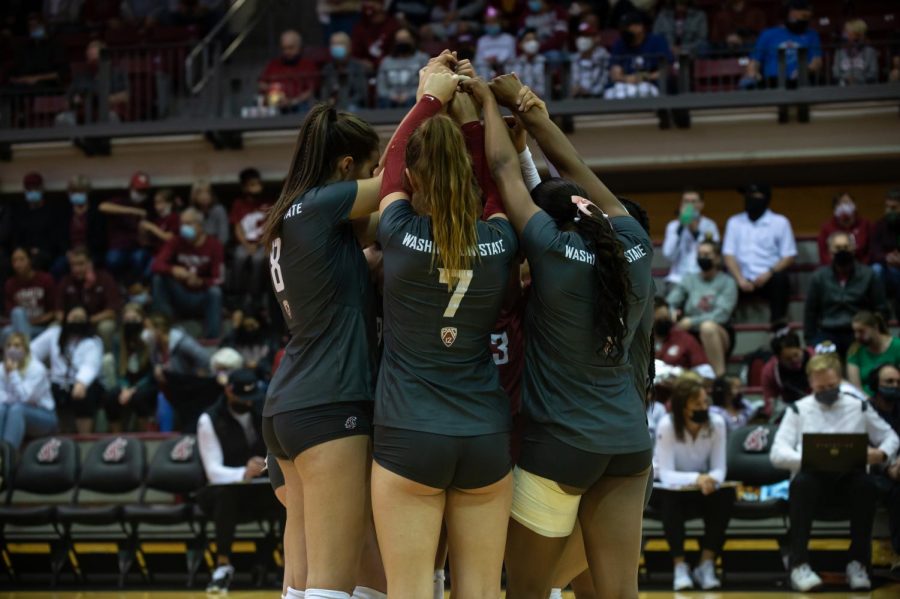 The WSU volleyball team prepares for a match against USC, Friday, Oct. 1, 2021, in Pullman.

WSU volleyball split their weekend road trip with a loss against Stanford and a win against California.

On Thursday, the Cougs played the Golden Bears and swept them 3-0 to pick up the win for the Cougs.

This was the first time in program history that the Cougs picked up a sweep on the road at Berkley. The Cougs picked up exactly where they left off in their last couple of matches. The women of the volleyball team had their best hitting match of the season with a .387.

Junior outside hitter Pia Timmer did leave the match with an injury and didn’t return for the rest of the match, but the Cougs adjusted to this loss. Junior middle blocker Magda Jehlarova had four kills on four attacks to lead the Cougs on the offensive attack. The Cougs held the Bears to a hitting percentage of just .167 as well as having three blocks.

In the second set, the Bears took a six-point lead over the Cougs. Redshirt junior setter Hannah Pukis was not going to let the Cougs fall in the second set. She took control and turned the tide for the Cougs. Pukis came up with two aces which closed the lead to just one. The Cougs completed their comeback and won off of a major block from Jehlarova.

The momentum came back for the Cougs, and it stayed with them this time. In the third set, the Cougs lead 12-10. Pukis and sophomore setter Argentina Ung had a dominant presence on the court with a combined five kills between the two of them. Junior defensive specialist Karly Basham had three aces to finish the set and win the sweep for the Cougs.

Pukis was named player of the match. She had her ninth double-double of the season as well as 28 assists and 13 digs. Pukis also had a career-high of four aces and five kills.

WSU also crowned a new queen of aces this weekend.

In their loss against Stanford, fifth-year Penny Tusa became the new all-time ace record holder for the Cougs. Tusa recorded three aces in this match to have a career total of 145 which is a new program record.

Ung had her first WSU start against Stanford, stepping in for the injured Timmer. Tusa also posted 12 digs and 10 kills. She also had her best hitting average of a .346 and only committed one hitting error.

In every set, the momentum seemed to be against the Cougs. There was a momentum change for one set which the Cougs won. The Cougs ended up falling 3-1 to Stanford.

Tusa was named player of the Match. She had an electric night despite the loss.

The Cougs return to action as they take on the Oregon Ducks on Thursday and the Oregon State Beavers Sunday.

Chief Brew Officer for Beercation of a Lifetime

Tips to help you prepare for emergencies.