Charleston, SC, Itinerary: A Weekend of Things to Do

Coming to Charleston, I knew I wanted to check out the Gullah Geechee community — descendents of Africans who were enslaved on rice, indigo, and Sea Island cotton plantations — so I cold-emailed BJ Dennis, a Charleston-based chef who’s part of the Gullah community. He always gets mentioned in association with the South Carolina food scene, and he appeared in the Netflix documentary High on the Hog, which traces the origins of African American food. We have mutual friends, so I sent him an email a month before my visit and told him I was coming into town with a girlfriend. We told him we’d love to drive out to St. Helena Island, about an hour and a half outside of Charleston and where the Penn Center is located, and asked for some recommendations. He gave us some and agreed to meet us. (He does formal events with the Gullah Geechee community, but this was much more informal.) He also recommended some quintessential southern spots we should go check out, and one of those places was Fuel Zone (5981 Savannah Hwy.) — an inconspicuous gas station that’s en route to the island. The gas station having good food is a southern thing. In New Orleans, some of the best fried chicken I’ve had was at the gas station. Chef BJ recommended Fuel Zone to us because it has a good quick breakfast. He recommended the fish and grits and the South Carolina pudding, a local delicacy similar to blood pudding. We got the fish and grits and ate it on the tailgate of the car.

On the way to St. Helena, we stopped by the Combahee River, where Harriet Tubman helped enslaved people cross. If you’re not paying attention, you can kind of miss it; it’s just like a sign on the street. We pulled over and parked the car. There’s a little bridge that goes halfway into the water and stops. It’s really nice. There’s an energy there. I had a similar feeling when I went to the National Museum of African American History and Culture in D.C. I like to sit in that silence and pay respect and imagine what that could have been like. 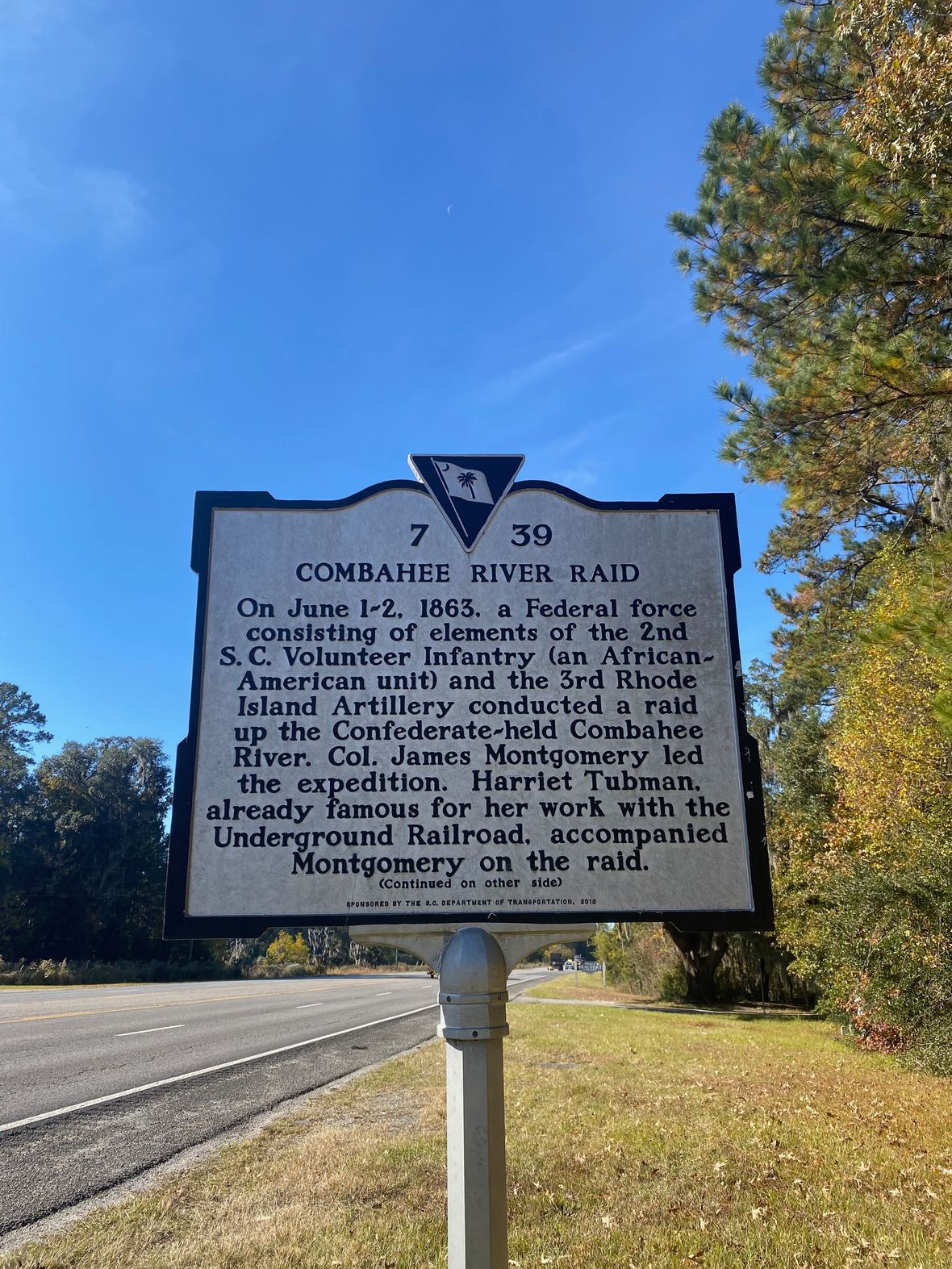 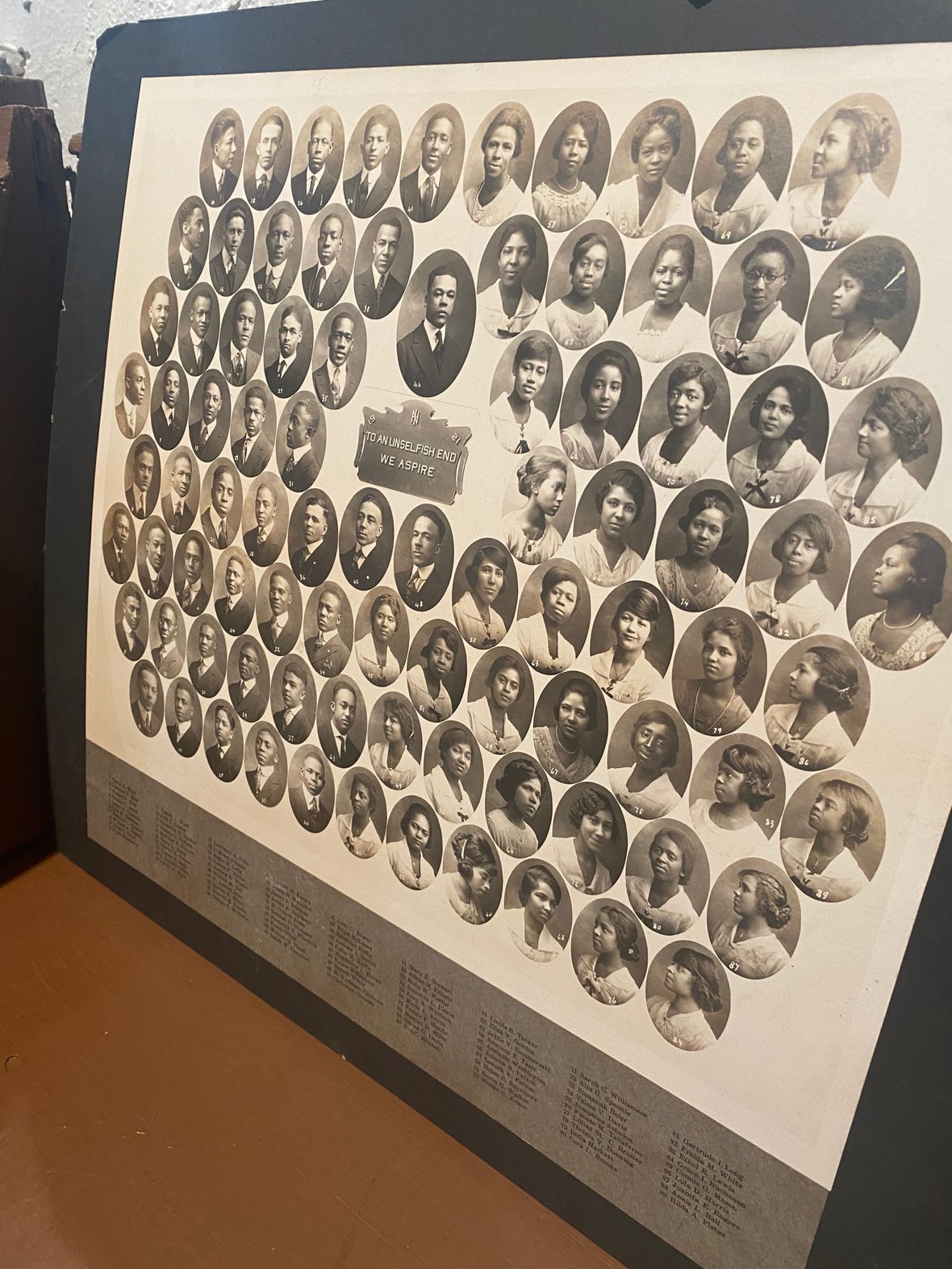 We arrived at the Penn Center (16 Penn Center Cir. E), which was the first school for newly freed enslaved people in the United States. When you drive out there, you notice it’s a bit separate from things. It was one of the few safe places in the South during that time. Now it’s a cultural center, and there’s a shop where a lot of artisans from the Gullah Geechee community sell their work. The Penn Center has a museum of photos that showcase the school’s history as well as artifacts, tools, and items from when the Gullah Geechee people occupied the space. 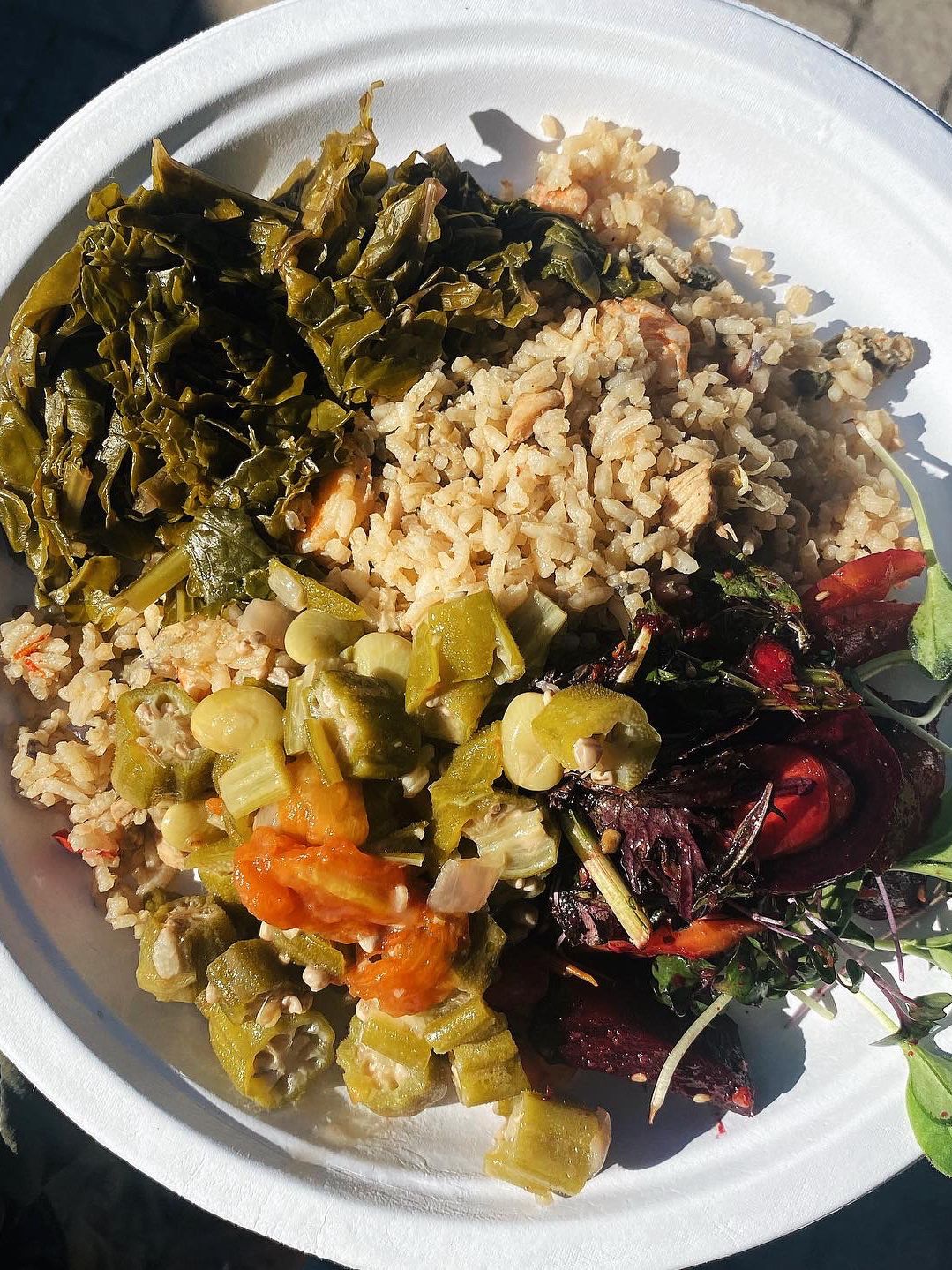 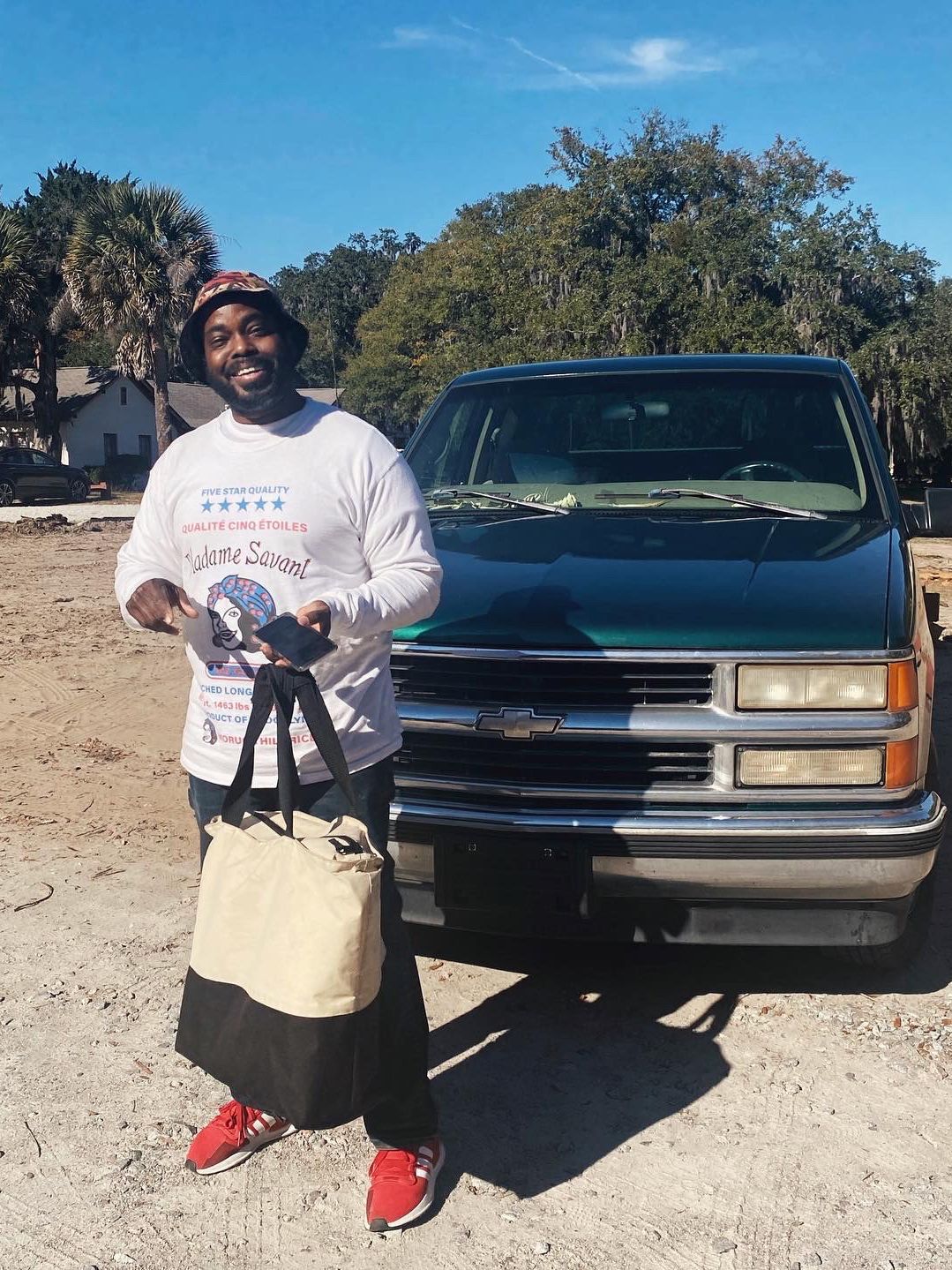 BJ met us there, and he brought a spread of food from his home made with Gullah Geechee ingredients. It was mostly plant based, but some of the food included shrimp and turkey because it was right after Thanksgiving. There was perloo, which is rice mixed up with those ingredients. He brought us kumquats, which were in season, okra, and benne seed, which is like a sesame seed but with a more elevated flavor. We ate on paper plates outside. It was so delicious. If we hadn’t had lunch with BJ, we would have gone to one of BJ’s recommendations: Gullah Grub (877 Sea Island Pkwy.), owned by another Gullah Geechee chef, Bill Green. People come from all over to eat his food.

BJ showed us around the island. We saw these little structures called praise houses, where newly freed people would gather. They’re smaller than a one-room schoolhouse. You could fit maybe six rows of church pews in the space. I read that this was done purposely because they didn’t want the masters thinking they were trying to plan large events or movements. It was a solace and a refuge. People didn’t call the police or the authorities; they fixed and solved their problems accordingly within the community. We went to two praise houses, which had no driveways or kept landscapes. Anyone can visit, but you can’t go inside because they’re unoccupied. We just followed BJ, but if you wanted to find one on your own, you can go to a website called Explore Beaufort. It has addresses for two of them: Coffin Point Community Praise House (57 Coffin Point Rd.) and Mary Jenkins Community Praise House
(355 Eddings Point Rd.).

Because of the Nickelodeon show Gullah Gullah Island, we also went to a small local fish shop, Bradley’s Seafood (1452 Sea Island Pkwy.), which was featured on the show. BJ wanted to show us how Gullah Geechee people have owned businesses generationally. They’re very much still active in the fishery community. You can get fresh shark and fresh fish and all that. BJ recommended that we stop at a prominent Black-owned seafood shop, Ravenel’s (5925 Savannah Hwy.), on our drive back to Charleston. It’s in Ravenel, about halfway back to the hotel. It was honestly the best seafood I’ve ever had. I got soft-shell crab, garlic shrimp, and garlic crab. It’s counter service, so we ordered and then ate it outside on the benches. 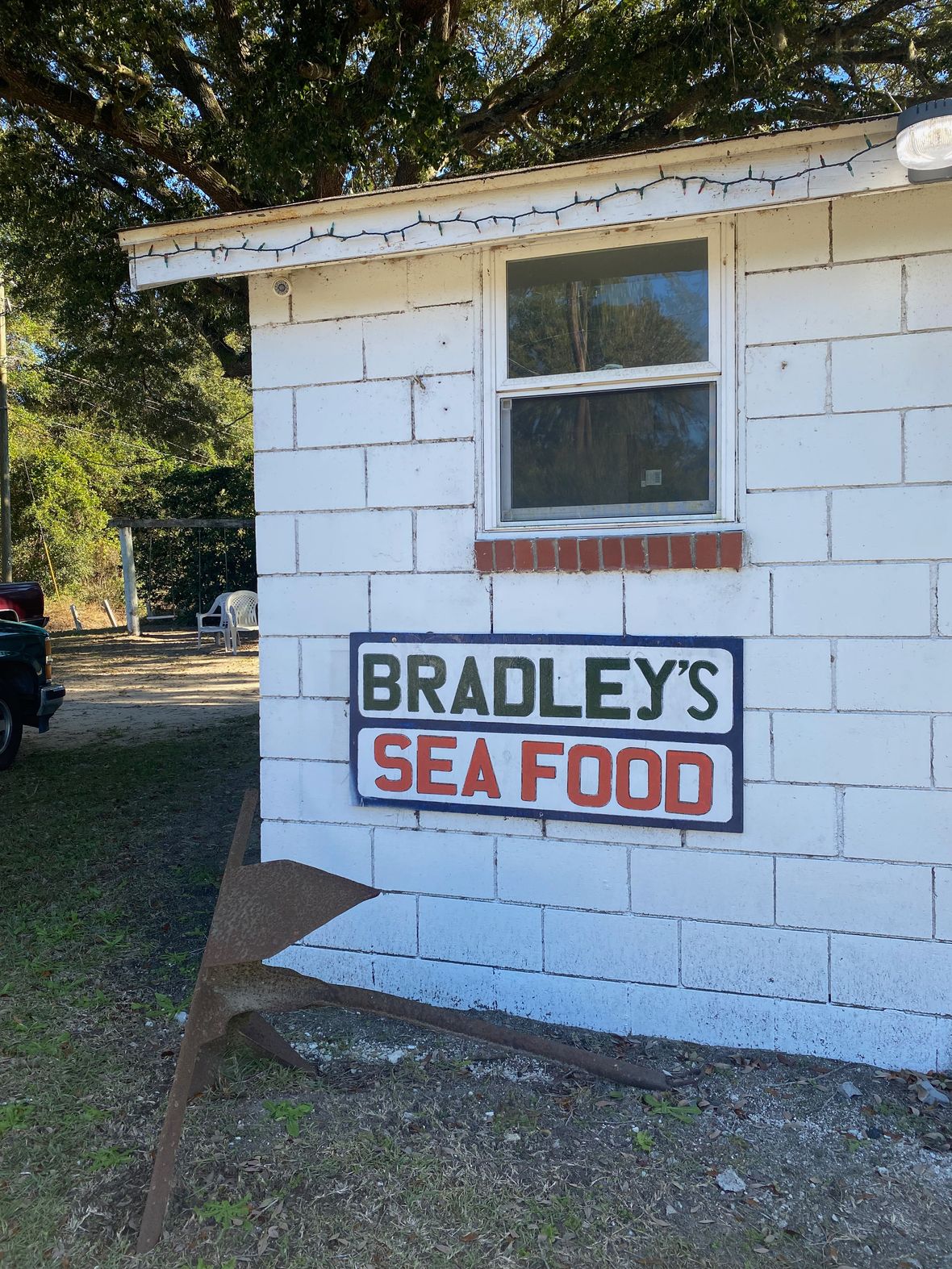 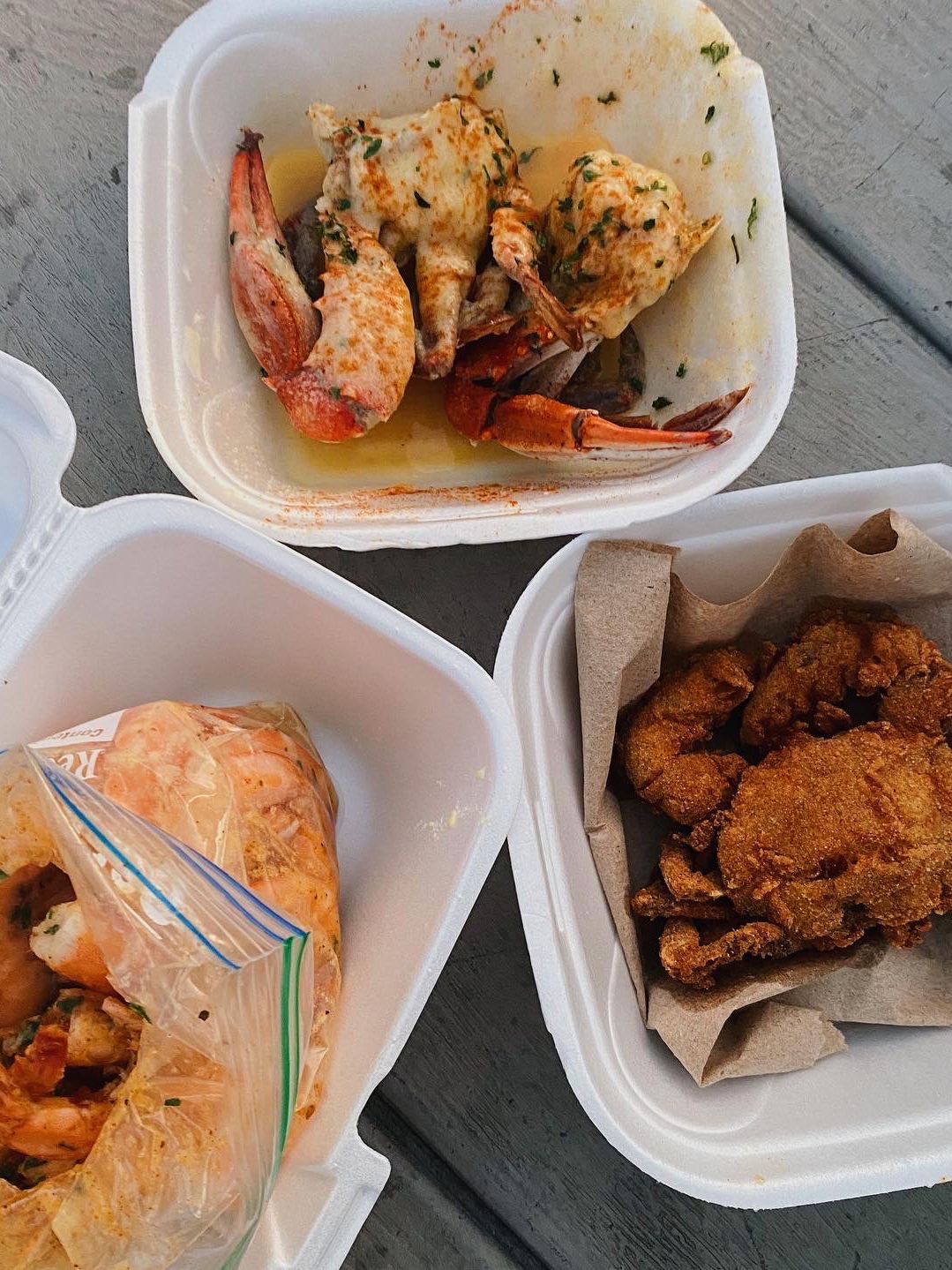 As we headed back to Charleston proper, I went to visit my friend Femi who went to college in Charleston and now owns a wine shop–slash–bar called Graft (700b King St.). He was in the music industry previously, and when you walk in, you see the paraphernalia of his past life, like record covers in the bathroom and all along the walls.

You can grab wine from the cooler, and there’s a beautiful bar where you can drink any of the wines you purchase. Elisa got an orange wine, and I got Champagne. Graft also does weekly pop-ups in its outside parking-lot space with various businesses. It’s every Monday, and there’s pizza. It’s almost like a block party.

Femi recommended we check out Bar Mash (701 E Bay St.) for live music. It reminded me of a feel-good bar you’d find in a small college town. It was sepia-toned almost. Lots of friends together wearing flannel. The band onstage was a motley, diverse crew playing a mix of soul and rock and roll. It was dope, and their voices were great.

Brazil, Land of the Thong, Embraces Its Heavier Self