Bruins shoot for winning trip in matchup with Stars 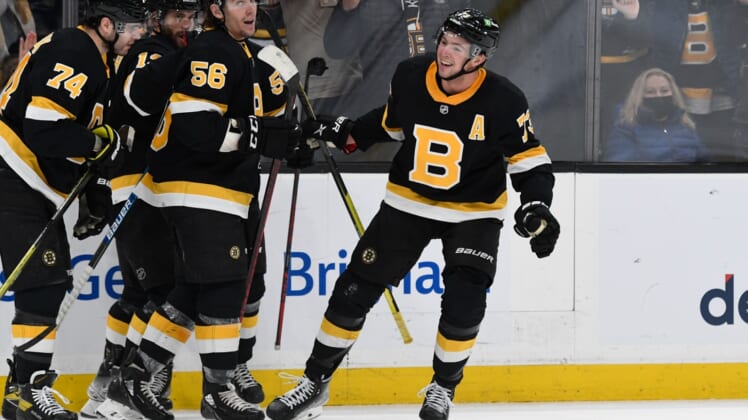 Charlie McAvoy and the Boston Bruins will aim to secure a winning road trip as they face a resurgent Dallas Stars team to cap a three-game jaunt on Sunday night.

After a hard-fought 4-3 overtime loss at Colorado on Wednesday, the Bruins bounced back with a 2-1 win at the Arizona Coyotes on Friday.

McAvoy potted the eventual winning tally on a power play at 13:41 of the middle period. Linus Ullmark stopped all but one shot and finished with 30 saves for Boston, which has taken points in four of its last five games (3-1-1).

Since the NHL’s COVID-related schedule pause, the Bruins have been playing their best hockey of the season with 11 wins in 15 games (11-3-1). After 41 games, fourth-place Boston entered Saturday’s action with a comfortable nine-point lead over Detroit for the final guaranteed playoff spot in the Atlantic Division.

“We’re halfway and if we have the same second half as the first half, we’re a 50-win team. We’re a 100-point team. That will get you into the playoffs, typically,” Bruins coach Bruce Cassidy said. “Second half is when you want to be playing your best hockey. Hopefully that’s the case for us.”

Ullmark is unlikely to get the start against Dallas after manning the net in each of Boston’s first two games on the trip. On Friday, returning Bruins netminder Tuukka Rask was a late scratch with a lower-body injury.

Cassidy did not rule out Rask for Sunday’s game against the Stars. However, the team’s website reports that — if Rask is unable to go — rookie Jeremy Swayman would be next in line to get the start with a promotion from AHL’s Providence.

Meanwhile, Dallas had been on a roll with four straight victories heading into Friday’s home contest versus Washington.

However, veteran Stars goalie Braden Holtby surrendered five goals on 27 shots in a 5-0 loss to his former Capitals team. The five goals allowed matched a season high for Holtby, who also coughed up five in a 5-4 loss at Vegas on Dec. 8.

Despite the loss, Dallas is trending in the right direction with seven wins in 12 games (7-5-0) since the league’s schedule pause. All of the team’s four prior victories had come away from home.

“We probably didn’t play that hard (against Washington) as we did on the road,” Stars defenseman Miro Heiskanen said.

Holtby opposed Swayman during the Oct. 16 meeting between the teams in Boston that produced a 3-1 Bruins’ victory. Holtby recorded 37 saves on 39 shots, and Luke Glendening recorded the lone Capitals’ goal.

Brad Marchand netted a pair of goals, and Jake DeBrusk also scored in the Boston victory.