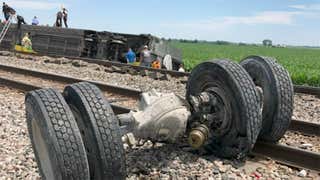 At least three people are dead after an Amtrak train collided with a truck on the tracks and derailed Monday afternoon in northern Missouri.

A passenger on board the train described seeing a dump truck just as the train approached.

“Then I heard a massive bang. The train lurched forward,” Dax McDonald told weather.com in a phone interview from the nearby high school where passengers are being sheltered.

The car McDonald was riding in was thrown on its side.

McDonald said he saw several people who were hurt.

“Other people in the car were bleeding, broken bones and stuff like that. Pretty severely injured,” he said.

At least two people in the train and one in the truck died, according to a news release from the Missouri Highway Patrol. Multiple others were injured.

At least 40 had been transported to local hospitals. At least six medical helicopters were seen at the crash site.

An earlier statement from Amtrak said the train was carrying more than 240 passengers and there were “early reports” of injuries. Eight cars and two locomotives were derailed.

McDonald, 26, was traveling with his mom and two sisters. They all escaped without injury. He and his sisters climbed out the opposite window of their train car. Photos he shared on social media showed passengers helping each other escape. McDonald’s mom, who had been in the restroom, stacked luggage to reach an exit.

McDonald and his family boarded the train in Flagstaff, Arizona, and were headed to Iowa. The train’s full route runs from Los Angeles to Chicago over the course of about two days.

The statement from Amtrak said the train hit the dump truck at a public crossing in rural Mendon, Missouri, about 95 miles northeast of Kansas City at about 12:42 p.m. CDT.

“There are approximately 243 passengers onboard with early reports of injuries,” the statement said. “Local authorities are currently assisting customers and we have deployed Amtrak resources to assist. Additional details will be provided as available.”

Early video from the scene showed people sitting on top of overturned train cars and walking around the area.

Further details weren’t immediately available. Weather didn’t appear to be a factor. Conditions were sunny with highs around 80 in the area.