4 Pro Tips for Your Next Upland Road Trip Hunt 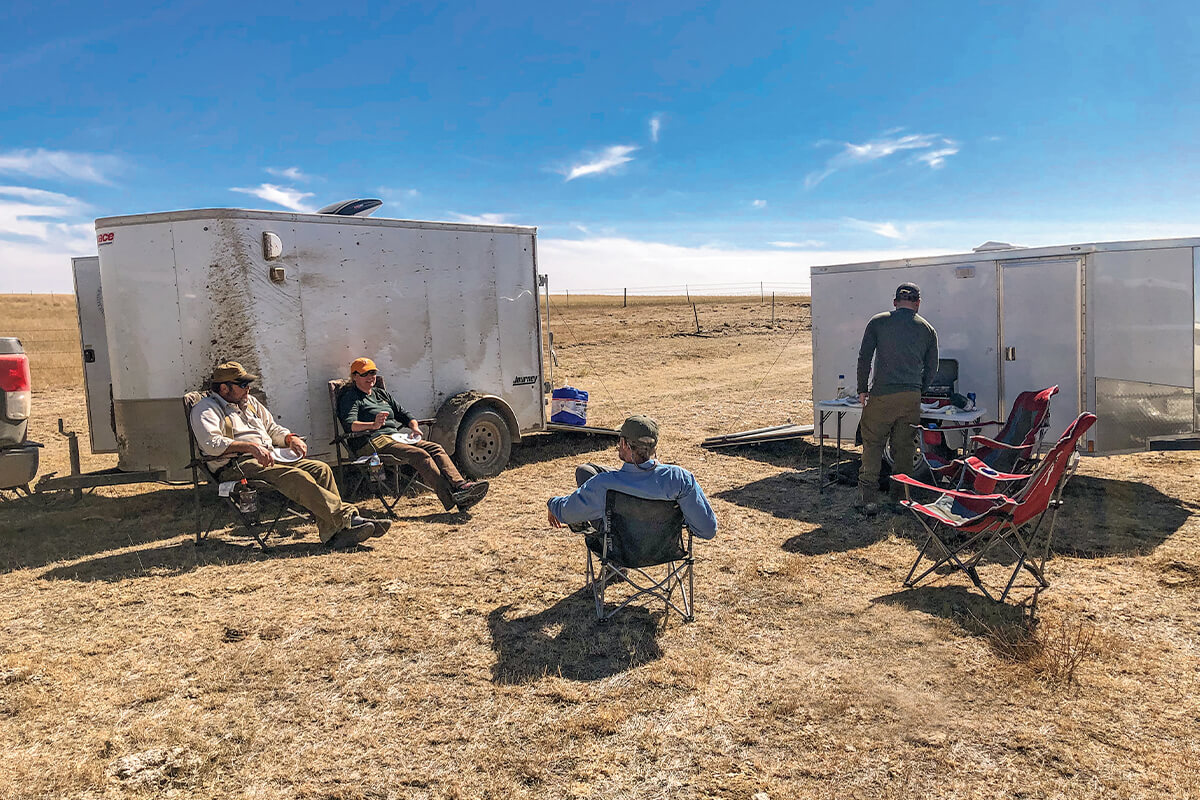 Both success and failure have lessons to be taught, and each trip is filled with them if you pay attention. (Photo By: Ben Brettingen)

There is an undeniable allure to heading west to hunt birds, in my case, Montana. Most folks head west for a summer vacation or winter skiing trip in the mountains. However, it’s the miles of what many would consider nothingness, that has captivated me. Every time the tailgate drops, and the dogs hit the dirt, I can’t help but think about how countless dogmen have traveled to the hallowed prairies to run veterans and new pups alike on wild birds.

Hailing from Minnesota, there is a lot of fantastic bird country lying along the 14-hour drive to Montana. However, it’s almost unfair to compare the millions of acres of sprawling hills against many places along the route. For 2020, the goal was to get off the beaten path and explore areas never hunted, and that’s how I ended up two days into a week-long trip without a bird in hand.

Scouting online has never been easier, and I’ve had a ton of success locating prime ground based on finding public land with great looking cover. With 90 percent accuracy I could jump on the onX Hunt app, find a piece of walk-in land that looked birdy, and head out with complete confidence I would find roosters. I crossed over into Montana with the same confidence, even though we were in search of Hungarian partridge, sage grouse, and sharp-tailed grouse—all species with which I’ve had significantly less experience.

“How hard could it be?” I reasoned with myself. If we couldn’t find bombers, then sharpies and Huns would be a great consolation prize. To up the pressure, I had invited a handful of my southern friends to make the jaunt from Arkansas, Alabama, and North Carolina. If you hunt or fish, you know the feeling of being responsible for the success of a trip. Even though you can always fall back on “that’s why they call it hunting,” or “it’s great to just spend time in the field”—I hate those excuses. At the end of the day, I felt responsible for finding birds, and making it a good hunt. I’ve had the chance to hunt with them numerous times, and they are a great group who likes finding birds but understands how it can go.

Here are four hard-earned lessons that just might help you the next time you point your needle toward the open road.

Lesson One: Choose Your Partners Wisely

Nothing can ruin a trip faster than having the wrong hunting partners. They could be the most kind, humble people on earth when you’re hanging out on the deck eating dinner, but everything changes when you’re stuck together for a week. Make sure everyone has the same expectations on multiple fronts, because nothing can ruin a hunt, or friendship, more quickly.

The first day greeted us with a 40-degree September morning, and you couldn’t have asked for a better start to the trip. As we climbed out of the river valley, the anticipation of dogs on point, and birds rising out of cover rose as well. What I thought would be a Block Management area that sported a perfect mosaic of sage brush and shortgrass prairie, was instead a barren wasteland. Over-grazed and seemingly devoid of everything but cow pies, I shrugged it off. “It’s fine. I just was planning on spending the next two days hunting here.” My “A” spot, as it turns out, wasn’t even worth getting out of the truck to hunt.

By the end of the day, I was feeling pretty shell shocked. Nothing looked remotely like it did on the aerial imagery, and to top it off, we didn’t see one sage grouse, sharptail, or Hun. I wasn’t going to give up, that would have to wait for day two.

A fresh road-killed sage grouse was an indication that at some point in the last few days there was something here. That’s all I needed. “Here we go, we’re back in the money,” I thought to myself as a grassy plateau rose from the plains. From the road, through binoculars, you couldn’t have asked for better habitat. She looked better and better, as we marched through great looking sage habitat, continuing toward the hillside and sharptail habitat: little swales dotted with plum thickets, and knee-high grass. It ran for miles, but I didn’t think we’d even need to cover a fraction of it before we’d be hiking back down with heavy vests. This wasn’t the case, as we covered every mile of that temptress. Over every single rise, I expected to see a motionless dog, eyes intently focused on a potential covey of birds.

Two full days of grinding, without a single bird contact to show for it. Let’s scratch the whole BS 2020, getting off the beaten path, memories of dogmen of a past era, ra-ra, mantra. New mantra: Find birds to hunt.

Lesson Two: Snap Out of It!

If it’s been a tough trip, you missed a bird, or your dog is acting up, just take a deep breath and let it go. Put on a smile, shake it off, and make the trip enjoyable. If you need to, sit down, have drink of water and compose yourself. Personally, I hold myself to a high standard. When things go awry, for the sake of your group, and your dog, just don’t.

That sounds simple enough, and when you’re not on ’em, it’s time to go! That’s exactly what was in store for the wee morning hours, as we chased the long white line to a completely new area. With my superb e-scouting display at the last spot, I was brimming with self-doubt. Miles and miles of dusty roads finally ended at a piece of public that actually looked really good. I couldn’t help but let hope start creeping back in. It was 10 o’clock in the morning, and the warm September temperatures wouldn’t give us more than a couple hours to run the thick-coated German dogs.

We split up to cover the section, and as soon as I dropped behind a hill, a telltale report of a shotgun echoed across the prairie. Knowing my counterparts would just as soon shoot a jackrabbit for the young Drahthaars, I was unsure of what was on the receiving end of the shot.

Then out of the corner of my eye, I saw a dog, who could have won a reigning horse competition, kick up a cloud of dust when he hit the brakes. When the telltale laughter from a covey of sharpies started, it was game on as two birds fell back to the prairie, much to the pleasure of my two dogs. Officially off the snide and life is good!

As we drew deeper into the cover, the chokecherry, and snowberry shrubs increased in density, along with the birds. Hopping from patch to patch, the sharpies held up their end of the bargain, erupting in singles, pairs, and coveys. As the noon hour approached, the thermometer climbed into the low 80s, and we laid under the shade of a thicket, thankful for the morning’s change of pace. We tried making our way back to the truck, at a leisurely pace for the dogs, but coveys of birds kept getting in the way. Not a bad way to close out the day. I could see their smiles from hundreds of yards away as the others in our group had similar success. The rest of the afternoon was reserved for enjoying a meal on the prairie and giving the dogs a chance to regroup for the next morning’s hunt. It’s too funny how quickly the tides can change, and attitudes can go from somber and tired, to cheerful and excited in no time.

It’s just as important to revel in the good times as it is to get the bad ones out of your mind. We get so wrapped up in going, whether it be to get to the next spot, or to shoot another bird, you forget to sit down and enjoy it. Pro Tip: Sharing your drink of choice with good friends after a hunt is often the best way to accomplish it.

Our attitude had shifted and at 5:15 a.m., everyone was sitting in the parking lot, chipper as can be, awaiting what we hoped to be another banger of a morning. There were a number of properties that looked similar to our day one area, and we split up to expand our repertoire. Early in the morning, when the sun was low and temperatures still reasonable, we were finding more birds out in the short grass, versus the brushier cover as the day wore on. Grasshoppers were the food of choice and by targeting the shortgrass areas around the woody cover proved to be a very effective technique. Bingo! As the day wore on, we followed the birds back into cover, and it made for an all-morning affair. One of the biggest keys to success was being able to connect the dots between what the aerial imagery was showing you by knowing exactly what it looked like on the ground. From this, I scoured the maps and found more properties similar to it. This opened up enough acreage to hunt days on end, so we wouldn’t take too many birds out of each covey and didn’t educate them for later in the season.

Lesson Four: Don’t Get Caught Up

When times are good, and the birds are plentiful, it’s easy to overlook little details. Far too many times, I hear about other hunters taking a trip and hunting one or two pieces over and over for days. Picking out things like type, thickness, and height of vegetation or if there are bugs present, can make a significant difference when you’re trying to find similar grounds.

At the end of the trip, we had our fill of birds, and good times. While sitting out on the prairie having our last meal of bacon-wrapped sharpie, the conversation turned to the plan for the coming year. With a resounding yes, its sounds like we’ll once again be meeting underneath the big Montana sky.