18 Best Vegan Doughnuts in the US You Have to Try

Do not underestimate the power of the doughnut. In WWI, simple balls of fried dough were said to raise morale of the US troops. Today, we honor those brave (mostly female) volunteers who worked overseas and prepared these sweet bits of edible respite amongst their many duties. June 4 is National Doughnut Day, and it is a day to honor the Doughnut Lassies. You can read more about the history of this delicious day here, but if you’re in less of an educational mood and more of a “how fast can I find a vegan doughnut?” craze, keep reading. From coast to coast and everywhere in between, here are the best vegan doughnuts to celebrate National Doughnut Day (or any day, really). 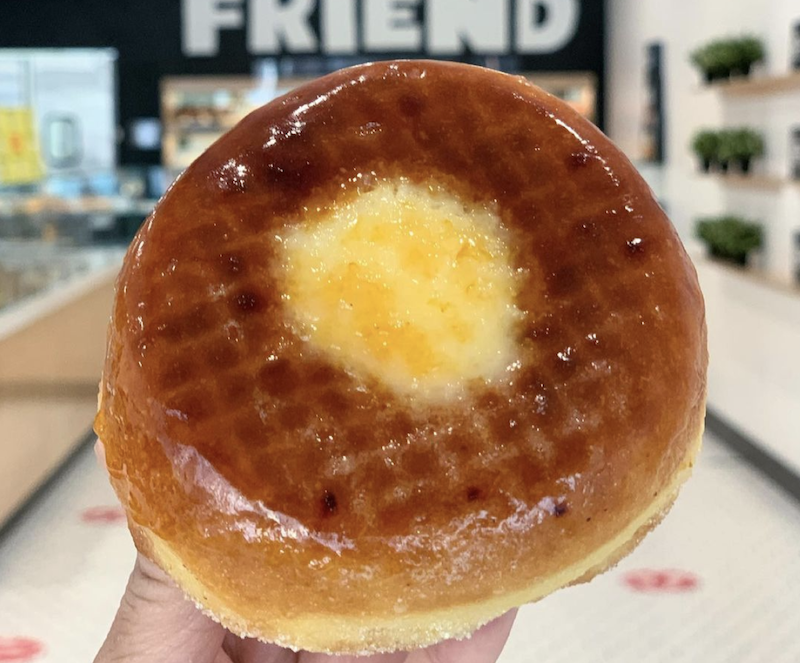 There’s so much wasted potential in a doughnut’s hole. Instead of leaving a gaping space of unsatisfying air, this vegan doughnut micro chain fills the gap with bavarian cream that’s topped with sugar and torched for a crème brûlée effect. In terms of dessert mashups, this glazed doughnut crème brûlée hybrid is a step above the cronut.
Get these doughnuts. 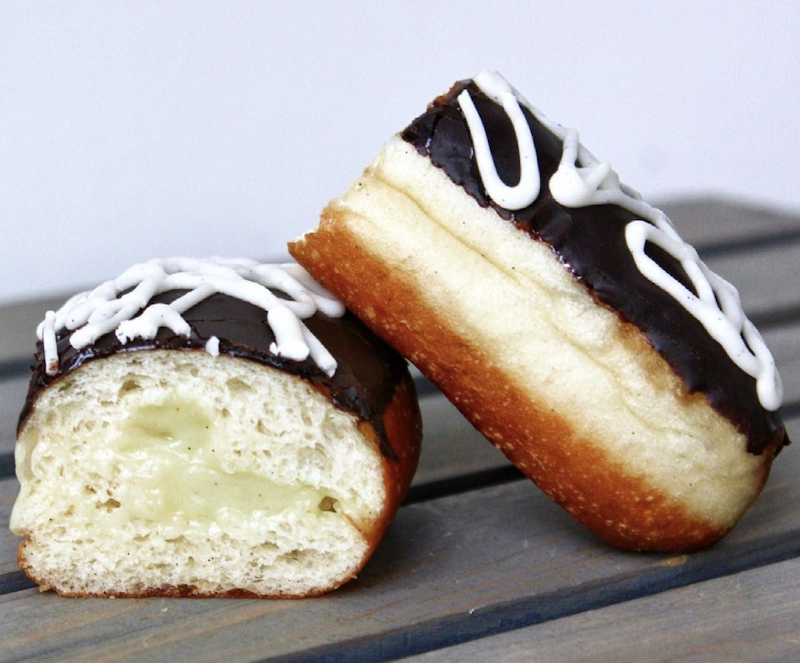 This doughnut is worth getting up early for. Based in Beacon, NY, and only open Fridays through Sundays with limited hours, this vegan bakery sells out fast. It’s a telling sign that you’re in for something great. Every morsel they make is epic, but the eclair doughnuts are over the top. Go traditional with a vanilla pastry cream filling and chocolate glaze or get spicy with the Cinnamon Pecan variety. Just stock up on whatever is left.
Get these doughnuts. 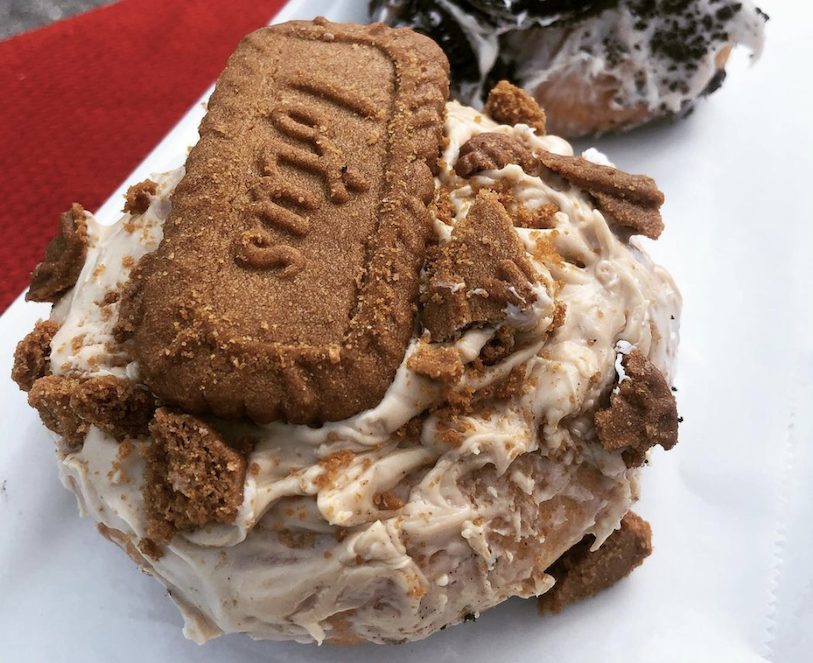 Those who eat cookie butter by the spoonful, you know who you are. While there’s a purity to spooning speculoos spread into your mouth, frosting a yeasted vegan doughnut with it is exponentially more delightful. Find them on the rotating menu at the Winter Haven farmers’ market.
Get these doughnuts. 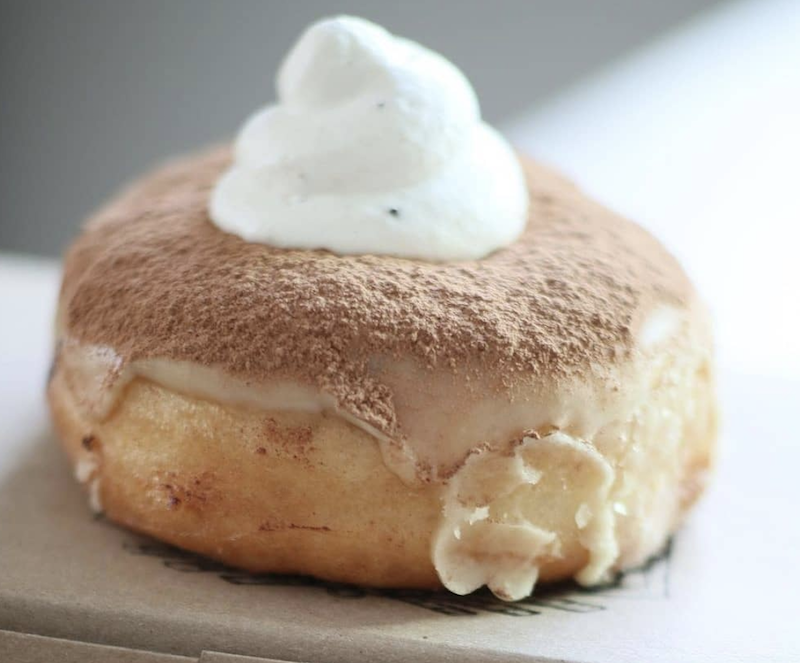 4. Doe Donuts’ Tiramisu-Filled in Portland, OR

The best vegan tiramisu may just be in doughnut form. This vegan doughnuttery specializes in yeasted, filled, and sweetly adorned fried dough. The tiramisu is a deliciously complex wonder of tart cream cheese filling, light-but-bready dough, and cocoa powder-topped coffee glaze. Enjoy with a double espresso.
Get these doughnuts. 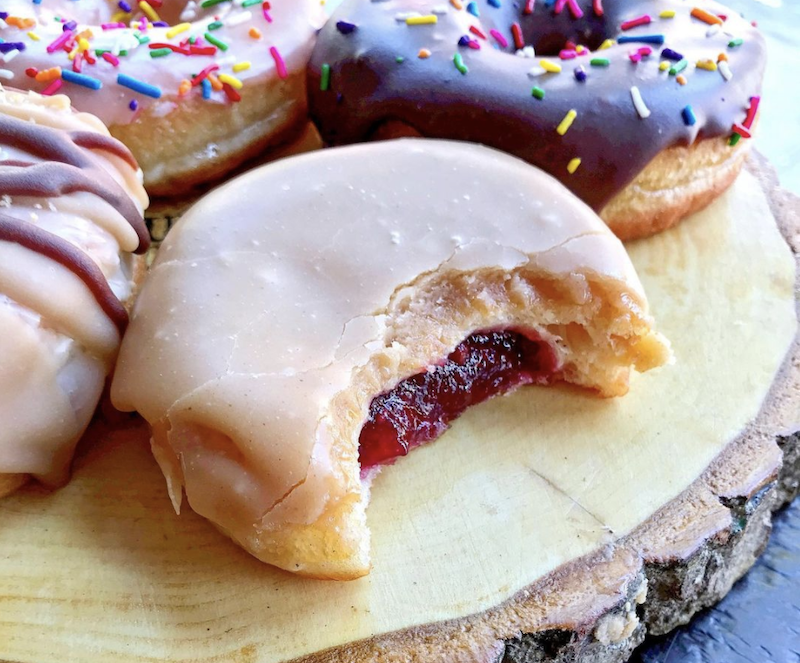 A step above the classic jelly-filled, this doughnut adds a thick layer of creamy peanut glaze to recreate this humble sandwich in fried dough form. There’s a reason why it’s a bestseller.
Get these doughnuts. 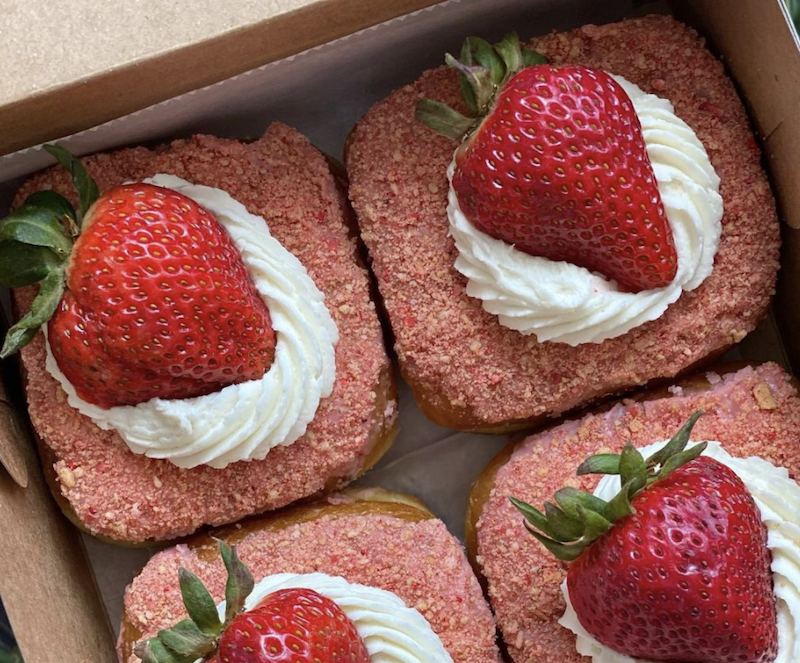 Based in the Cleveland area, this specialty bakery offers a rotating list of inventive doughnut flavors, but customers and visitors alike can rely on the recurring Strawberry Shortcake. It’s a square, filled doughnut topped with strawberry crumble borrowed from the famed ice cream novelty and finished with a center dollop of whipped cream and a fresh strawberry. You’ll need two hands (or a knife and fork) to take this doughnut down. Note: as of June 2, the store is temporarily closed due to the death of the owners’ mother. Follow the company on Instagram for reopening updates.
Get these doughnuts. 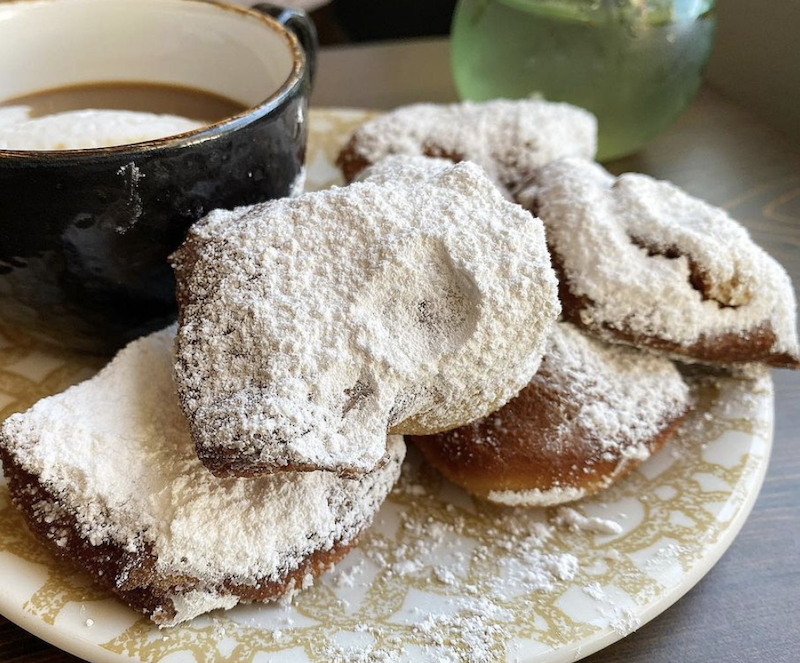 By culinary definition, a beignet is a doughnut. Now that’s settled, seek out a hot batch of these melt-in-your-mouth, powdered sugared treats. Enjoy with a large cup of coffee and a mountain of napkins. Plan your outfit accordingly—do not wear black or risk sporting a powdered sugar residue all day.
Get these doughnuts. 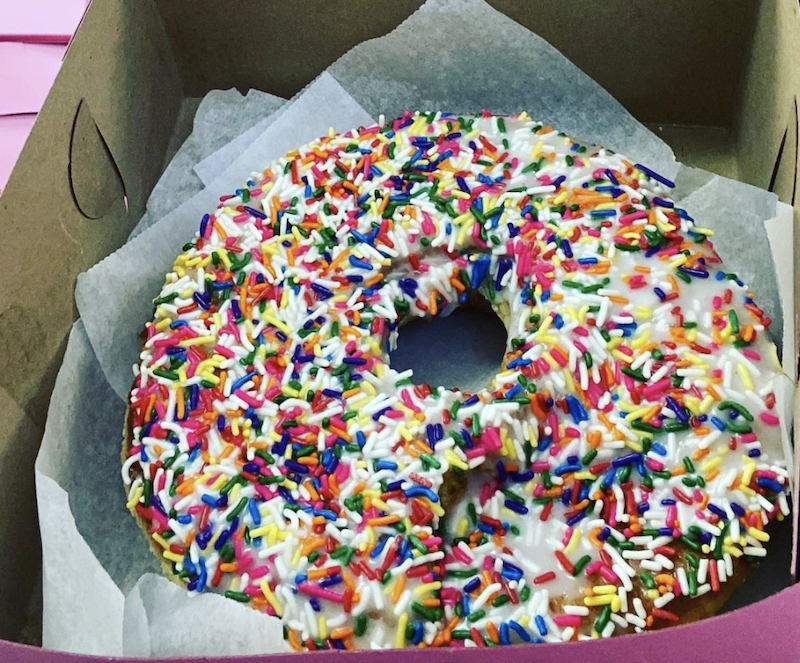 This no-frills vegan doughnut shop is cranking out some of the best vegan doughnuts in the country, according to its loyal fans. Grab yourself a dozen and make sure to snag a few sprinkle-topped Birthday doughnuts with a smattering of rainbow jimmies and a thick vanilla glaze.
Get these doughnuts. 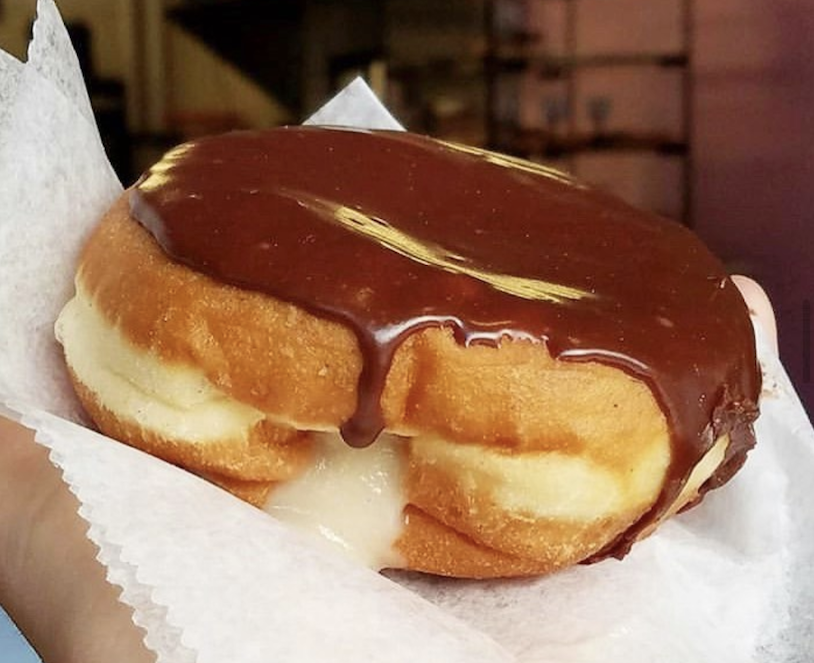 The flavors change daily at this acclaimed vegan doughnut shop, so while we’d love to recommend the blueberry pop tart-topped option or the spicy chocolate cheesecake-filled chef special, it may not be around during your visit. Pro tip: order the constant Boston Cream and always go for the chef special if it’s not sold out.
Get these doughnuts. 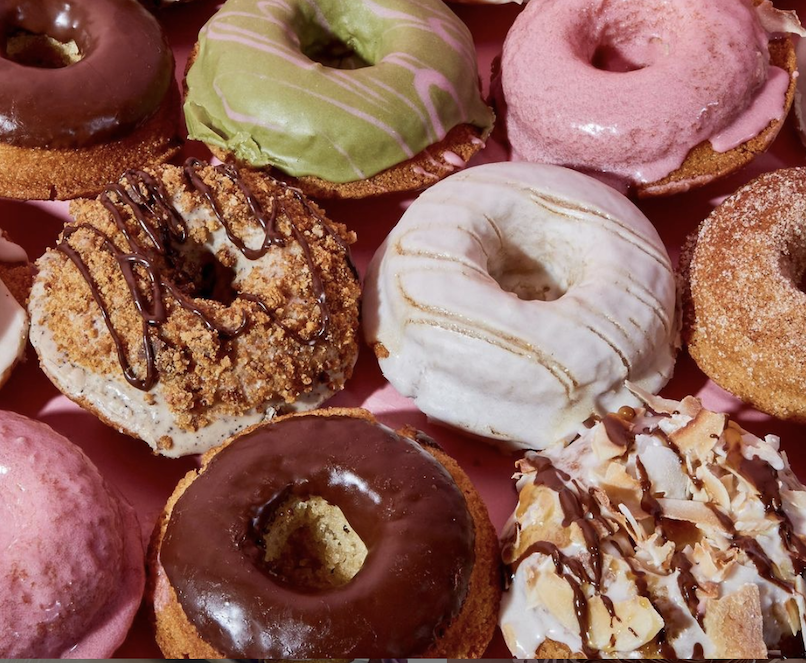 Looking for something gluten-free that doesn’t taste gluten-free? Erin McKenna’s got you. This bakery’s cake doughnuts are sublime and never gritty. It’s a tough choice between the coconut-and-chocolate-topped Samoa and the Coffee Crunch, but the texture of this coffee-flavored, crumbly topped treat calls our name every time.
Get these doughnuts. 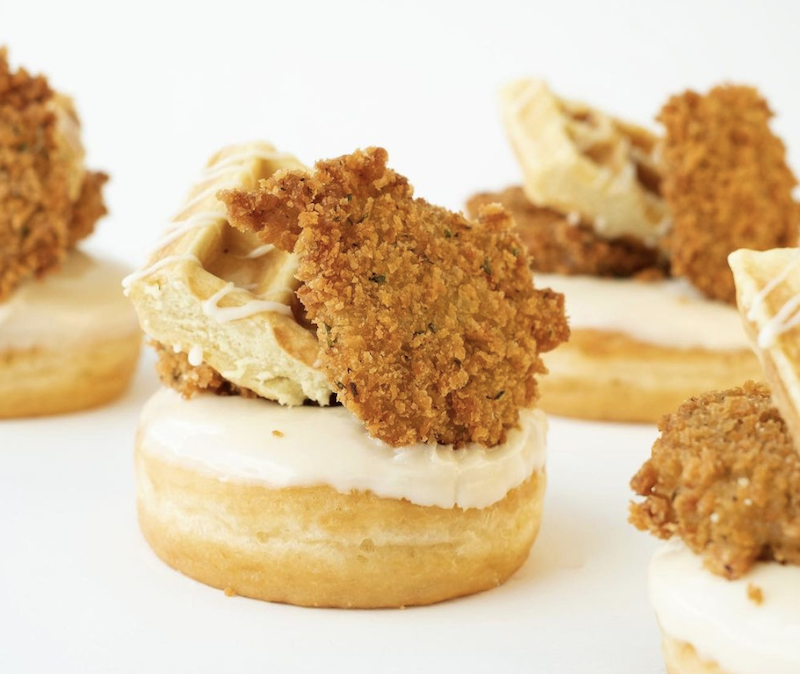 This mashup only appears at the baker’s discretion, so if you see it in store, grab it. Light and fluffy doughnuts are dipped in a maple glaze then topped with two pieces of homemade crispy fried “chicken” and miniature Belgian waffles. If you thought chicken and waffles was a crazy combo, this doughnut will blow your mind.
Get these doughnuts. 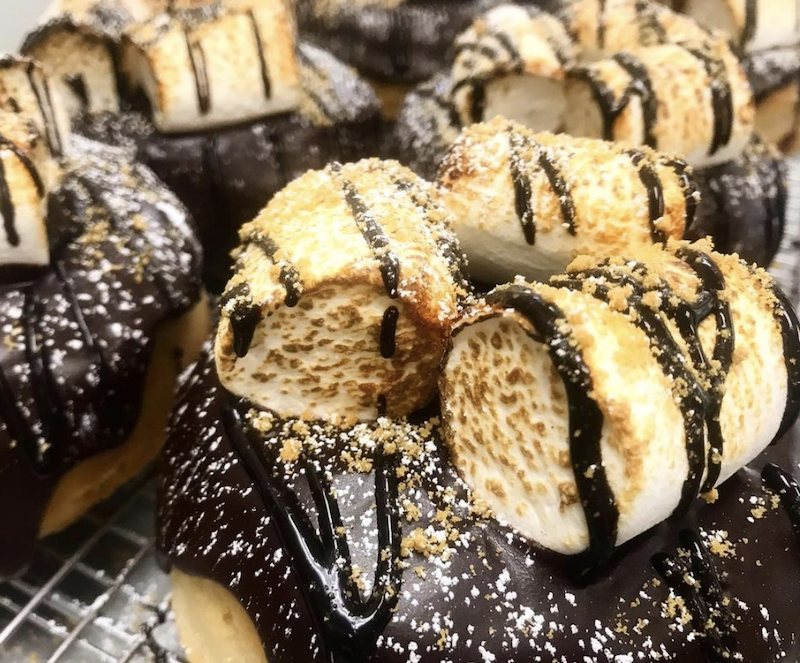 Not all the doughnuts at this boutique doughnuttery are vegan, but at least half are. While the colorful Raspberry Pistachio or pretty Cherry Blossom may first draw your attention, feast your eyes on the colossal toasted marshmallow- and graham cracker-topped chocolate glazed pastry. You’ll have to unhinge your jaw to taste everything in one bite.
Get these doughnuts. 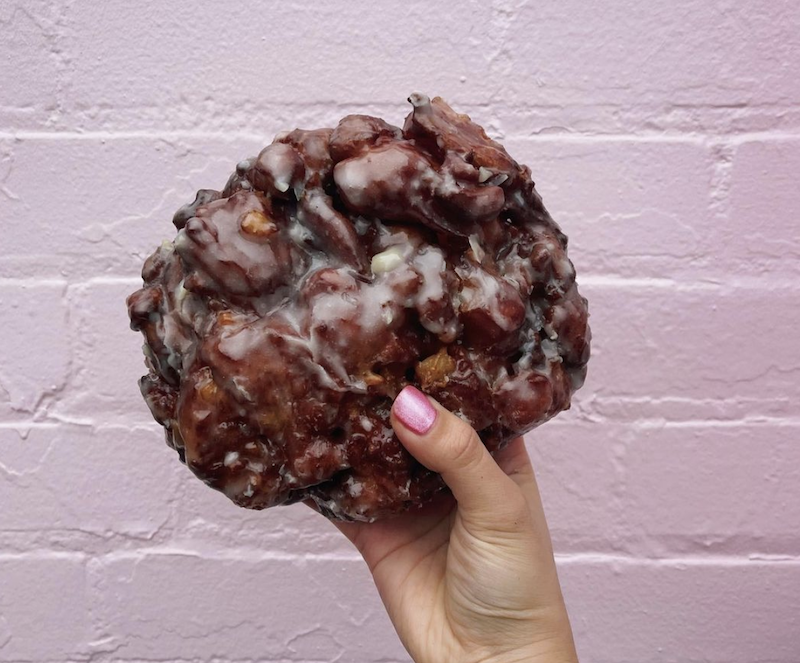 As the country’s capital, it was high time DC had its own vegan doughnut shop. Established in January 2021, the small shop with a light pink exterior specializes in yeasted and glazed confections. Certainly, grab your fill of these frosted treats, but leave room for the head-sized apple fritter. It’s sweet, craggly, soft, and fluffy all in one.
Get these doughnuts. 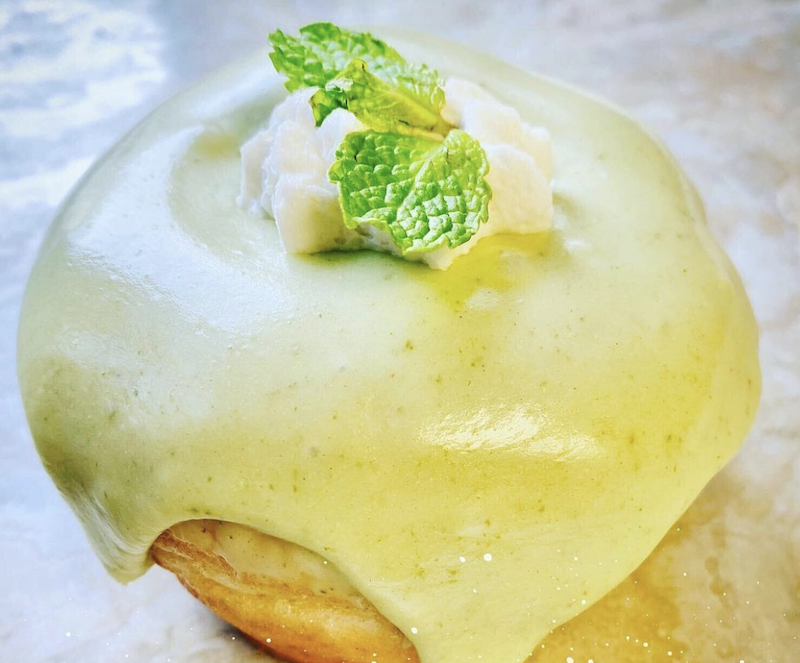 It was extremely vexing to choose just one stand-out flavor from this vegan-friendly shop, but the Mint Julep edged ahead by a nose. The pastel green pastry is a yeasted round topped with bourbon and mint glaze, vanilla whip, and fresh mint. Why drink your cocktail when you can devour it?
Get these doughnuts. 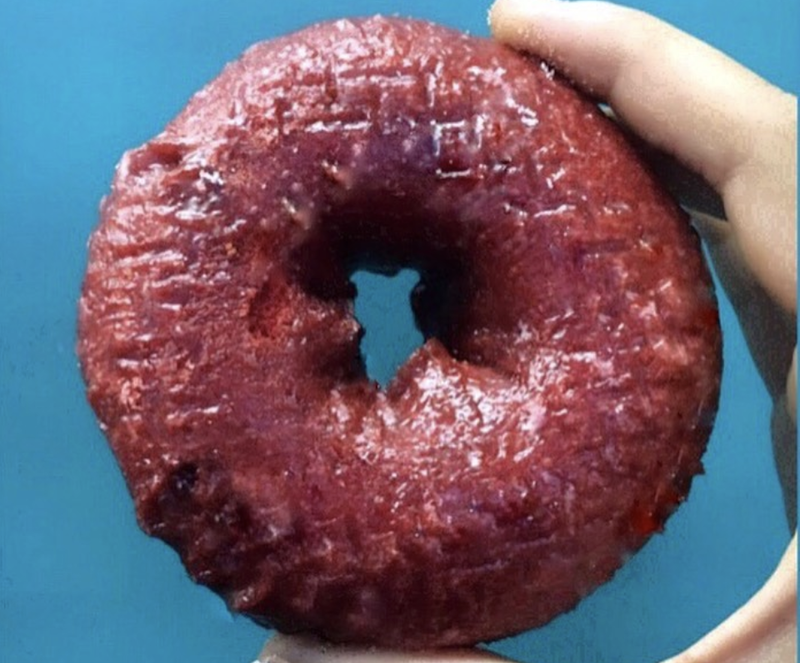 This surftown doughnut shop will never let you down. It’s open 24/7, 365 days a year. We profiled The Donuttery last year for National Doughnut Day to see how it managed to stay afloat (and open) during the turbulence of 2020. Given the vast assortment of vegan options here, we always try to mix it up whenever we visit, but the humble blueberry cake doughnut will forever be a constant in our orders.
Get these doughnuts. 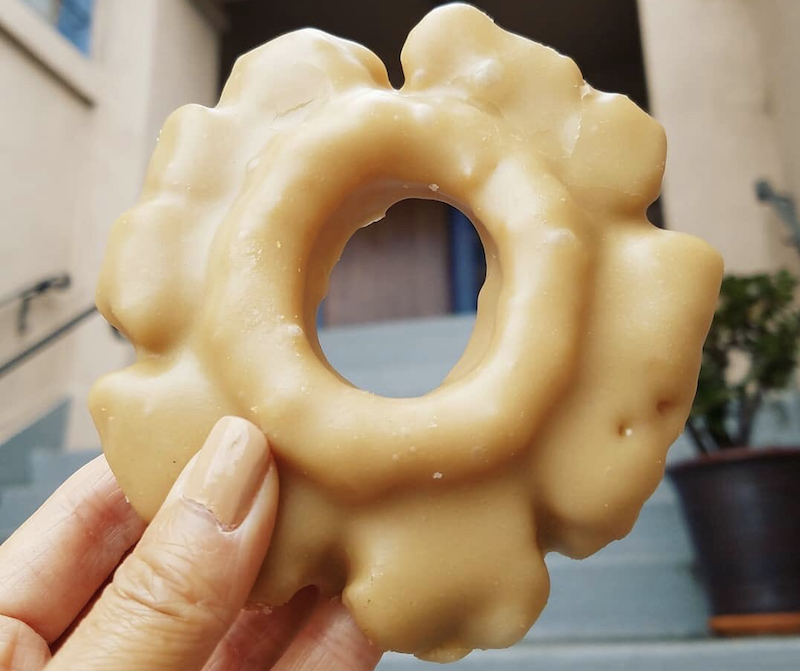 This old-school Oakland-based doughnuttery is serving up affordable, accessible, pink-box doughnuts to the Bay Area. Each bite into this crinkly, maple-glazed old-fashioned-style doughnut is utter perfection.
Get these doughnuts. 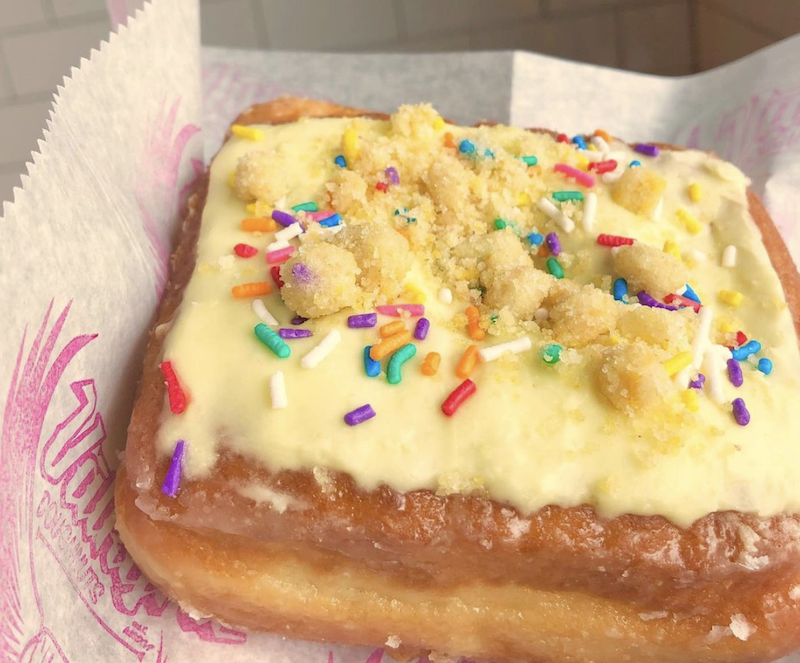 There’s more than one reason to visit Orlando, and it’s not Disneyworld. These square-shaped doughnuts surpass any vegan-friendly treat you may find in the surrounding amusement parks. When it’s in rotation, snag the Birthday Cake if you can. Think of it as a traditional sprinkle doughnut kicked up 13 notches—it’s hand-sized yeasted dough topped with a thick birthday cake-flavored glaze, rainbow sprinkles, and homemade funfetti cake crumb. Stick a candle in it and start celebrating.
Get these doughnuts. 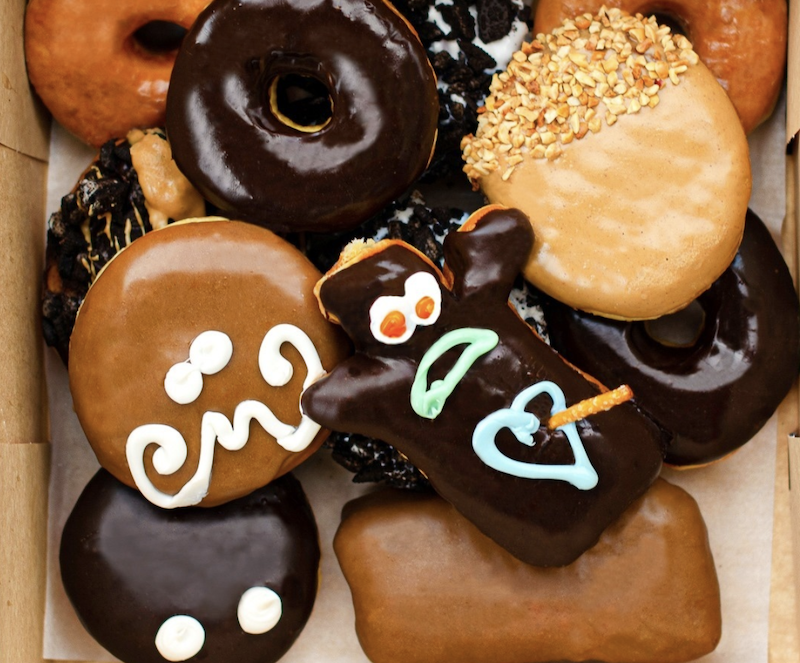 Not for the easily offended, this edgy, in-your-face doughnut chain is known for its crass inventions both in name and shape (we won’t sugar coat it—several cream-filled flavors are phallic-shaped). We’re fans of several of the vegan flavors, but first-timers have to try the brand’s namesake Voodoo Doll doughnut. Shaped exactly as it sounds, the playful yeasted treat is filled with raspberry jelly, glazed with chocolate, and stabbed with a salted pretzel stake. This is definitely a time to play with your food.
Get these doughnuts.

Tanya Flink is a Digital Editor at VegNews as well as a writer and fitness enthusiast living in Orange County, CA.

Love the plant-based lifestyle as much as we do?
Get the BEST vegan recipes, travel, celebrity interviews, product picks, and so much more inside every issue of VegNews Magazine. Find out why VegNews is the world’s #1 plant-based magazine by subscribing today!

Win a seven-night holiday for two at Angsana Corfu

Win a seven-night holiday for two at Angsana Corfu