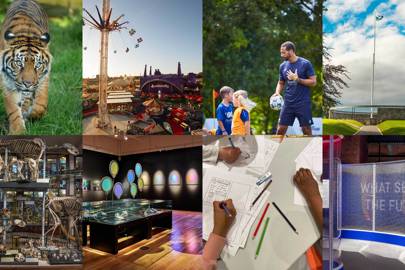 Inspired by real-life art heists – such as the Van Gogh theft in Amsterdam in 2020 – this immersive escape room experience in an old City office block sends you and your team on a mission to purloin a priceless painting. You’re supplied with torches, blueprints and a walkie-talkie with a friendly voice at the other end to guide and give tips – we won’t give any spoilers away but expect to scuffle around on your hands and knees and crouch behind packing crates when the security guards pass through. There are three rooms in all, each with a different set of logic-based puzzles to solve so you can move to the next, while the clock keeps ticking… It’s huge fun for a small group – we recommend three or four maximum – and is perhaps best for those aged 10-plus with an adult in attendance. Shorter legs, of course, are handy for evading those laser tripwires…

The Monopoly Lifesized Junior Edition at The Court

As anyone who has ever moved a tiny metal top hat, dog or shoe around a board and passed Go knows, Monopoly can take over a whole afternoon or even a day. There are now editions for most major cities in the world, with spin-offs such as Monopoly Longest Game Ever, which we don’t recommend buying if you want to keep your sanity. This new experience on Tottenham Court Road, though, takes the classic board game to a new level: it’s a life-sized version of the game in which, like giant chess, players move around the board themselves. There are four versions to choose from, with players greeted by Mr Monopoly himself, and challenges along the way. Get ready to roll the dice.

Things to do with kids around the UK

Influencer Kaitlyn McCaffery in Coma After Scooter Accident in Bali

Coach K’s farewell tour: Mike Krzyzewski leads Duke over Gonzaga for his seventh win vs. a No. 1 team